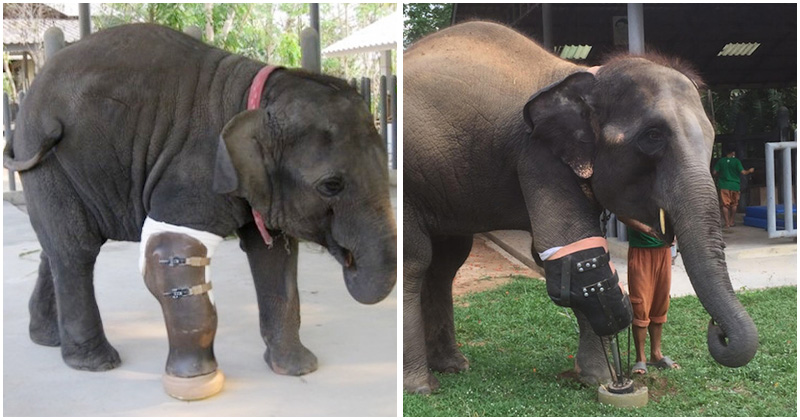 Mosha is an elephant who makes history, not because she does something extraordinary or she is somehow different from other elephants. This girl is remarkable because she is the very first elephant in this world to receive a prosthetic leg from humans.

The poor girl lost one of her front legs 10 years ago after stepping on a land mine near Thailand’s northern border with Myanmar when she was only seven months old. It took the luckless calf two years to finally healed and thankfully two years later, she had the chance to meet surgeon Therdchai Jivacate at the Friends of the Asian Elephant Foundation hospital – the world’s first elephant hospital in Lampang, Thailand.

Therdchai Jivacate is a compassionate surgeon who has been giving free prosthetic limbs to both humans and animals through the Prostheses Foundation, which was founded by Jivacate himself in 1992. He is famous for his inexpensive yet enjoyable and durable prostheses that are often made from local materials. Over 20,000 beings have been benefited from his kindness and generousness, and Mosha is one of them.

Since Jivacate first met the elephant calf 8 years ago, he has been constantly giving her multiple new legs to keep up with her steady growth. Of course, her very first artificial leg was the toughest one for his team. Jivacate had made prosthetic limbs for cats, dogs and even birds, but elephants were obviously dissimilar.

These tender creatures were known as the biggest animals on land so it’s no surprise that even elephant calves were way heavier than adult dogs, and creating special legs for them was truly a huge challenge.

However, Jivacate wasn’t ready to give up. He knew he had to continue at all costs for the elephant’s sake.

“The way she walked was unbalanced, and her spine was going to bend,” said Jivacate. “That means she would have hurt her cartilages badly and eventually stopped walking. And she would have died because of that.”

After several failed attempts, Jivacate and his coworkers eventually successfully created a prosthetic leg made of thermoplastic, steel and elastomer that could carry Mosha’s weight and didn’t make her uncomfortable at all. She learned to use it in only 12 hours.

Mosha changed 3 different legs in her first year and now that 8 years have passed, the lucky tusker has received a total of 9 prostheses so far. Meanwhile, Jivacante and his team still continue to try newer materials to help her walk on all four as freely as possible.

“Animals don’t ask that we make legs for them, but we wanted to give Mosha one,” Jivacate continued. “I think she knows that I make her prosthetic legs as each time I come to the elephant hospital she makes a little salute by raising her trunk in the air.”

Barring Gray-Brown Back, Pinkish-beige Belly With Bright Red Patch, And Vivid Red Eye Mask, This Waxbill Is Truly A Gemstone Of Nature

Dog Loves To Bark At All Time, That Embarrasses Owner But Brings Joy To Strangers!