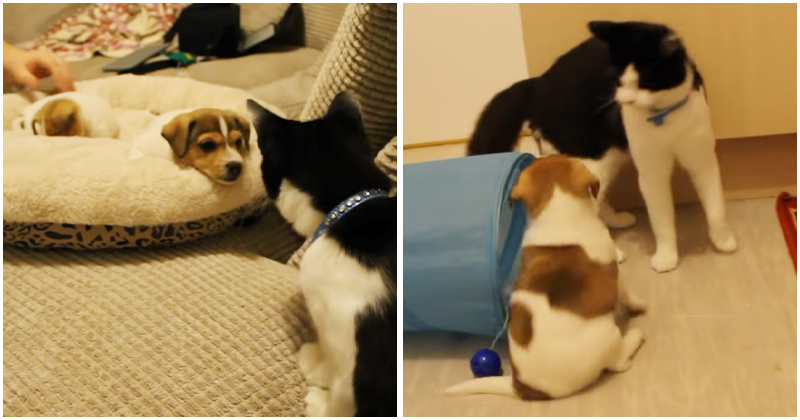 Cats and dogs are said to be mortal enemies and the complication of their relationship often comes from the cats. Cats in general aren’t as friendly as dogs and they are often really alert in front of any creatures that are bigger than them. However, if you give them enough time to get to know each other, cats and dogs are actually able to get along really well. They can even become best friends no less.

The funny furry critters in this video are a great example. At first, Floki the bicolor kitty wasn’t really impressed as his parents brought home two little puppies – Luna and Marley. After curiously sniffing and looking at the carrier for a while, the cat walked away nonchalantly. It seemed like he wanted nothing to do with the new intruders.

When their mom opened the door and let the puppies out, Floki tried to approach the dogs again but quickly give up after a short while.

This time, it was Luna who came up to say hi to the big cat, wagging her tail happily. Yep, that’s a daring and delightful girl right there!

Despite the not-so-happy encounter, the very next day, they already became friends and played with each other. While Luna was taking a nap, Marley was thrilled to have fun with his new pal. He wasn’t any less cheerful and fearless than his sister!

Even though Floki was still a little uncomfortable around the energetic puppy, he didn’t mind hanging out with him at all. That thoughtful cat was really careful when using his paws on the pup too.

While Marley excitedly discovered his surroundings, Floki was unable to keep his eyes off the joyous boi. He was like a big brother watching over the troublemaker of the family, making sure nothing bad would happen. Such a funny duo!

Let’s take a peek at these lovely moments:

Do you have a cat and a dog under the same roof? How do they often treat one another? Please share your story with us, and don’t forget to share this gleeful story with your loved ones too!

Allowed To Jump On Bed For The First Time, Little Dog Plays On It For Hours And Refuses To Leave

Clever Kitten Named ‘Mulder’ Has Figured Out How To Open Doors