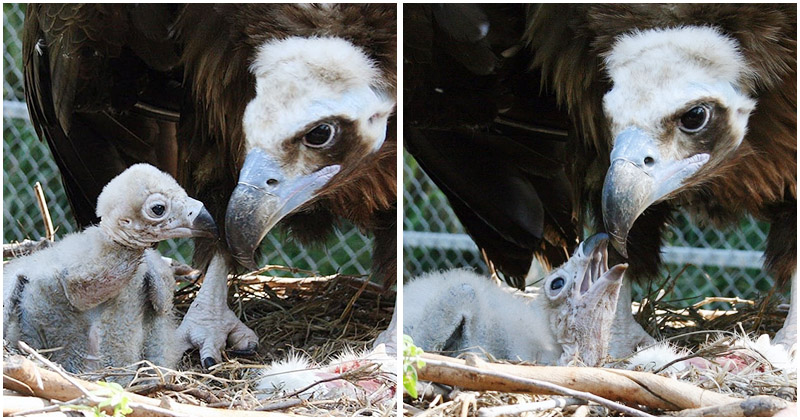 This summer, Zoo Miami happily welcomes the second baby cinereous vulture that hatches successfully and survives in the zoo’s history, only one year after the first one came to their big family in May 2020. The chick looks quite healthy and seems to be growing just fine.

Zoo Miami has taken part in the Association of Zoos and Aquarium’s Species Survival Plan which is aimed at managing a genetically diverse, demographically varied and biologically sound population of ex situ species including the cinereous vulture. Two adult cinereous vultures at the zoo – Valentino and Tessa, are a part of the plan.

Valentino hatched at the Living Desert Zoo and Gardens in California in 2009 and Tessa hatched at the Buffalo Zoo in 2010. Despite their age, the monogamous pair only has two babies so far.

For their only egg to safely hatch, the couple had been incubating it continuously for roughly 50 days. The incubation took place on their nest in a secluded area of the zoo and zookeepers only showed up briefly to deliver food during that period. No one could approach their nest and it’s not until a few days after hatching that they finally got a chance to catch a glimpse of the newborn.

The cinereous vulture (Aegypius monachus) is also known as the black vulture or monk vulture. As the largest of the Old World vulture, an adult cinereous vulture can weigh up to 20 – 30 pounds. Like other members of the family Accipitridae, cinereous vultures are diurnal raptors and often feed on carrion. They are found in various parts of Europe, Asia and the Middle East.

The cinereous vulture’s population has been declining rapidly over the last hundred years due to poisoning, higher hygiene standards (which leads to the reduction of its food supply), hunting and habitat destruction. It is currently listed as “Near Threatened”.

20+ Animals That Know How to Survive Hot Summer Days

Koala And Wombat Share An Amazing Friendship That Wows Zookeepers