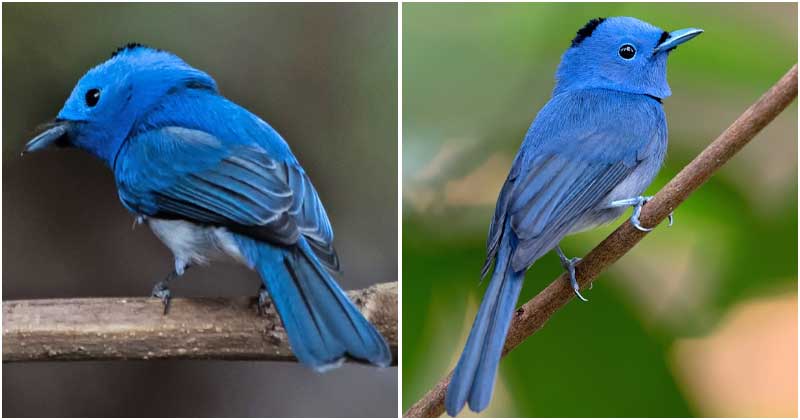 If you love the beautiful blue shade of gemstones, you won’t keep your eyes off the black-naped monarch. Stretching to around 16cm long, but this chubby little bird can grasp your attention wherever they appear. This striking bird wears an elegant and chic coat of blue gem color, making it stand out from the crowd. Not just that, white feathers on the belly and a distinctive black patch on the back of the head also make it more conspicuous. The bill and legs of this species are even a bright blue color. That’s why they are dubbed stunning flying gems. Do you agree?

Like many other birds, the female black-naped monarch is duller than the male. They are greyish-brown and do not have a black patch. The black-naped monarch distributes throughout the tropical areas of South Asia, from Iran to Sri Lanka to the Philippines. They live in thick forests and habitats with a lot of wood.

This species joins in pairs and form foraging flocks of mixed species. During the breeding season (from May to July), female black-naped monarch builds their cup-shaped nests. These nests are made from filaments of webbing and fungi. They not only produce antibiotics but also protect the hatchlings from infections. Female birds then lay 2-3 eggs in the nest and incubate them. Male birds will join the female in feeding the chicks until they are fully fledged.

If you love this beautiful little blue bird, just share the article with your family and friends. The world of birds is so amazing!

22 Illustrations That Show How Life Changes After Getting A Pet