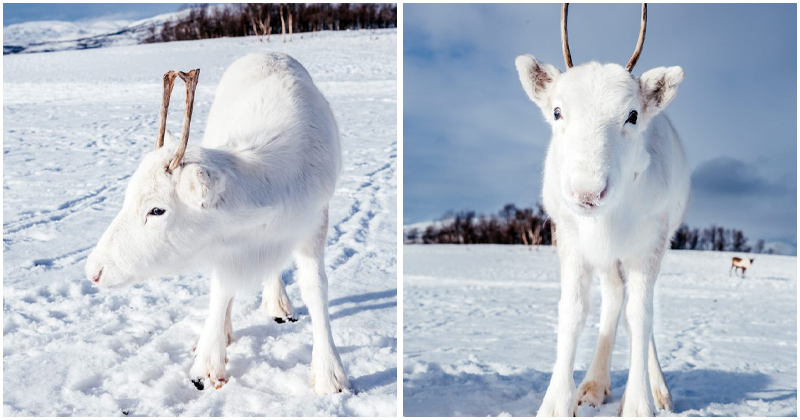 Many photographers search a lifetime for one special shot but not all of them could be lucky enough to find just what they have been longing for. Some people, however, don’t need to search at all. The exceptional moment simply comes to them naturally and all they need to do is just seizing the opportunity. That’s it.

Photographer Mads Nordsveen from Oslo was out hiking with his friends in Norway when a fascinating being caught his eyes: it was an all-white reindeer calf, wandering on the thick snow. To be honest, he almost disappeared into that white snowy background, but it’s still hard not to notice such a gorgeous creature.

“I was walking in the mountains looking for nice landscapes for my travel photography when out of nowhere I saw this wonderful little creature,” Nordsveen recalled. “He came very close to me and we looked at each other straight in the eyes.”

Despite his apparent camouflage, the baby reindeer wasn’t shy in front of humans at all. He had no intention of running away or attacking the stranger. Needless to say, that little boy immediately captured Nordsveen’s heart with his out-going and cheerful nature. He didn’t mind posing a bit for the camera either.

“He was quite relaxed when he saw that I was calm and friendly,” said the 24-year-old photographer. “It was almost as if he posed for the camera. He was very curious and fun. Like a little explorer.”

“After some minutes the mother of the baby reindeer came out of trees just behind,” he said. “He walked around for some minutes before running back to his mother.

However, Nordsveen would never forget that magnificent encounter.

“It was very magical and a fairy tale moment,” the man continued. “Maybe one day we’ll meet again.”

White reindeers are extremely rare in the wild. In spite of the perfectly white coats, it’s not hard to see that they aren’t albino since these charming creatures still have some dark pigmentation in their eyes and antlers. In fact, it’s an uncommon genetic mutation that strips pigment from their fur, making them colorless.

Raccoons Have Both Funny And Cute Vibes Inside Them, Proving Through 30 Pics

Mr. Bigglesworth, The Hairless Bunny, Was Rescued From Euthanasia, Now Lives As An Instagram Star