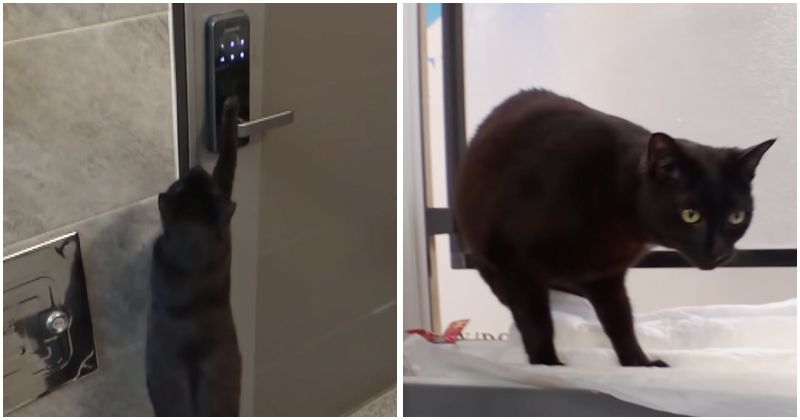 It’s no secret that cats are social animals who need affection and companionship just like us humans always do. And once they have their minds set on something, they don’t mind going the extra mile just to get what they want.

Dwae-Bum the black cat in this story is an amusing example. The stray stumbled upon a kind man on the streets and their bond bloomed beautifully right at their first meeting. From that moment on, Dwae-Bum just couldn’t leave that hooman. The cat attempted to enter his door lock’s code to get inside not once, but a dozen times daily, whenever he was awake. He even tried to sneak in through his window sometimes.

The compassionate man would love to take Dwae-Bum in too, but the pawblem was he didn’t live alone. Living with him in the apartment were his wife and a white Pomeranian named Thor, and needless to say Thor and Dwae-Bum didn’t get along very well, just like the colors of their coats.

So, whenever his wife took Thor out for a walk, the man would let Dwae-Bum come in, pet him and play with him. But their happy moments never lasted really long. When Thor came back, Dwae-Bum had to go out.

However, the stubborn kitty didn’t want to give up just like that. He kept on wandering around their front door from day to day, and his persistence successfully melted their hearts. The couple had no choice but to adopt the smart cat, but they still needed to figure out how to handle his relationship with Thor.

So, they invited an expert and learned how to treat Thor and Dwae-Bum fairly so they wouldn’t be jealous and started attacking each other. Thankfully, their efforts were paid off. Thor gradually became more accepting of the cat and seemed to be calmer around him.

Here is the happy ending for the clever cat’s story:

Please share Dwae-Bum’s sweet story with your friends and family!

Do Cats Miss Us When We Leave?

10+ Dogs Who Have A Strong And Irrational Fear Of Cats

Sweet Sick Street Cat Got Rescued And Fought For His Life

20+ Cats Who Got A Truly Stunning Look From Nature

10 Things Cats Do That You Will Relate To