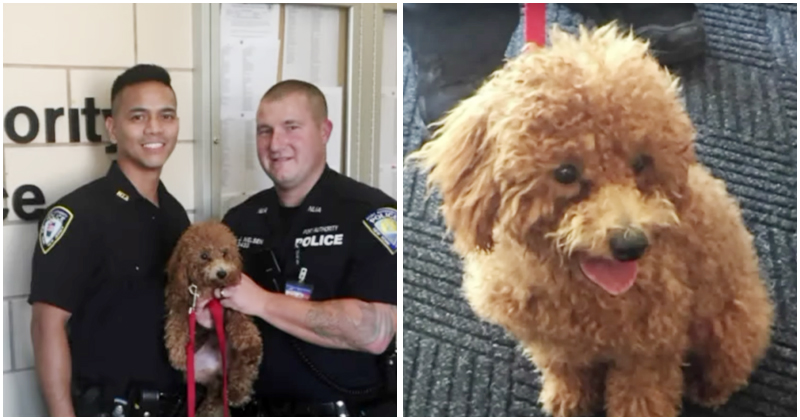 Dogs may be man’s best friend but this doesn’t mean that man always knows how to treat these friends fairly. Because of the irresponsibility of the careless owners, so many dogs’ lives are put at risk daily.

Baxter the poodle was so unlucky to have such a thoughtless owner, but he was still lucky he got saved just in time. The poor boy already appeared to be suffocating when two officers Jason Nielsen and Ray Lainez spotted him trapped in a hot car all alone at the Newark Liberty International Airport. They didn’t know how long he had been stuck in the car, but there was one thing they did know: they had to act fast.

The two quickly jumped into action and thankfully they found a small crack on the car as its sunroof was slightly opened. After about 15 minutes of struggling, they finally managed to get in from the top of the car and unlock one of the doors. Yes, they saved that puppy’s life. If it hadn’t been for their kindness, his life would be threatened for sure.

Baxter was rapidly brought out of the parking lot at the airport. Thanks to timely medical treatment, he recovered real quick, but his owner was nowhere to be seen even though the airport staff did try to call him or her several times. They even confirmed that the little boy was doing fine, but that person still refused to show up.

It wasn’t until at least one hour later that the inattentive owner appeared, at last, only to face animal cruelty charges because of their unmindful actions. There’s no way Baxter would be returned to that awful parent.

The fortunate boy later was handed to the Associated Humane Society of New Jersey in search of a better family where he could be cherished and cared about more. And hopefully, that day would come soon.

Please share this story to raise owners’ awareness about how to take care of their pets properly.