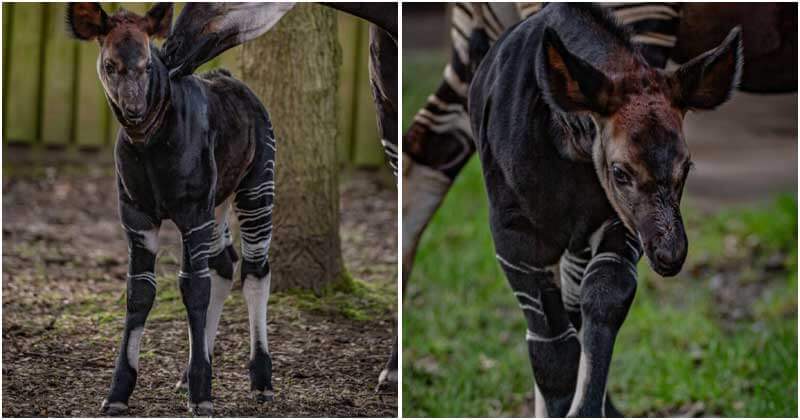 Okapi is an endangered animal. It’s the only living relative of the giraffe and listed on the Red List of Threatened Species of the International Union for the Conservation of Nature (IUCN). Over the past two decades, their population has decreased by 50% due to illegal hunting and habitat loss. The Okapi is elusive. It’s quite hard to spot them in wildlife.

That is why the birth of any baby Okapi is worth celebrating. And, the Chester zoo has that luck. They welcomed the arrival of a newborn okapi, Nia Nia, at the end of last year. “The birth of an okapi calf is cause for great celebration – they are incredibly rare and incredibly special,” Sarah Roffe, Team Manager of the okapis at the zoo shared. The rare creature was born to 7-year-old K’tusha and 17-year-old dad Stomp.

The calf has just started its very first steps outside. It looks incredibly cute with zebra-like stripes on its back legs like its mom. These stripes allow it to follow its mother in the forest and keep it hidden from predators. There is a story behind the name of the Nia Nia. The baby Okapi was named after a village in the Democratic Republic of Congo (DRC) – the only country in the world where okapis are found in the wild.

Additionally, these rare animals are the national symbol in the Democratic Republic of Congo. Iridescent, Plum-Violet Tones Combine With Purple-Blues Making This Bird Shine In All Seasons!

20+ Pet Who Will Never Forget Their Visits To The Vet

30 Animals That Forgot The Word “Boredom” In Their Life

20 People Who Are Enchanted By Their Beloved Pets