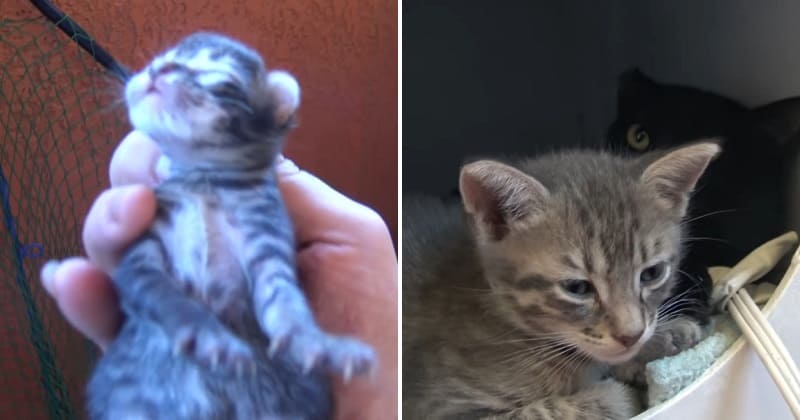 When Hope For Paws received a call telling about a cat who gave birth on a patio, JoAnn Wiltz and her team rushed to the scene to rescue the family. JoAnn tried to secure the mama cat with a net but she was afraid of people. The scared cat quickly escaped and ran away when seeing people. Knowing that the mom would return for her babies, the rescuers set up a trap and used the kittens as bait. One hour later, the mom cat came back and walked into the trap to meet her kittens. They finally caught the family and quickly took them to Kitty Bungalow, a feral cat rescue and socialization facility that is dedicated to saving and caring for the most vulnerable of felines, feral cats, and kittens. At Kitty Bungalow, the cat and her kittens were checked their health and cared by great volunteers. The rescuers and fosters decided to call the mama Paris and name her kittens Fromage and Baguette. They lived happily with their rescuers in their loving home. Later on, Paris adopted an orphaned kitten named Escargots and nursed him back to health. The mama was feral, so she was released to an FIV positive colony where she will have food and medical care when she needs it. A check-up showed that the kittens were all positive for Feline Immunodeficiency Virus (FIV). It compromises the immune system of cats, so they are more susceptible to infections and diseases. Thankfully, these kittens are so strong and healthy that their immune system may beat the virus. They will be checked and tested every 60 days until they are six months old.

Eventually, the kittens were adopted by great people. They are living a happy life now. Hope For Paws shared that if the kittens do end up positive, FIV cats can live long normal lives even with negative FIV housemate. Thank you so much for the true words about FIV! Thank you so much your team, Kitty Bungalow, and who involved for saving this mama and her babies! Bless you all! Meet Starlight, The Sunburned Kitten Grows Up To Be Gorgeous And Fluffy

35 Wholesome Duck Pics That Will Hopefully Make You Smile

20 Weird Cats Who Love Sitting On Their Butts

10+ Photos Proving That Cats Are Sweet And Gentle