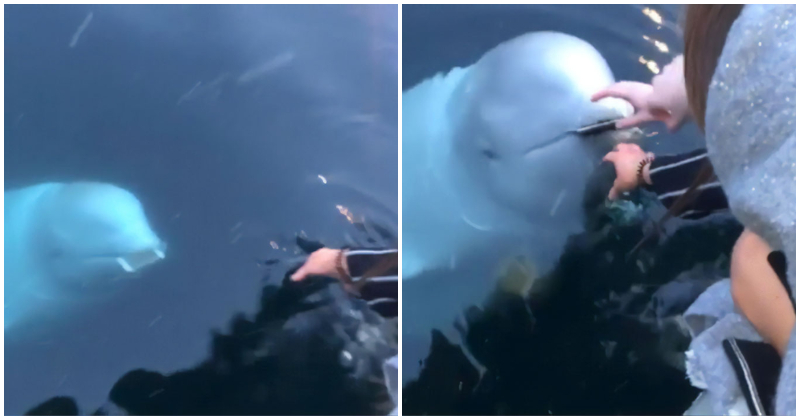 Whales are not only friendly but also smart. These marine mammals are ready to help people if they can. The Beluga whale in this story is a great example. It doesn’t hesitate to give a woman a hand in finding her phone that she accidentally dropped into the sea. Animals are sometimes kinder than humans. The kindness of the adorable and well-mannered whale was filmed on camera and shared on social media a few years ago. Even though it’s an old video but it still goes viral when being shared again. The action of the ocean creature is among the most cutest and most beautiful things in this world. Ina Mansika is the woman who receives the help of the whale. She was out on the water in the boat when she had a mishap. Isa put her phone in her pocket but accidently it slipped and went overboard, directly dropping into the sea. She thought that she had lost it already. But her “hero” appeared with her phone in its mouth.

As it turned out, the marine mammal had dived into the sea and found her phone. Not just that, it gently approached Ina so that she could grab the phone.

“We laid down on the dock to look at it and hopefully get the chance to pat it. I had forgotten to close my jacket pocket and my phone fell in the ocean. We assumed it would be gone forever, until the whale dove back down and came back a few moments later with my phone in its mouth!” Ina said. Of course, everyone in the boat got astonished at the presence and help of the friendly Beluga whale. One of a friend of Ina captured those moments that quickly became an Internet sensation. People admired the intelligence and kindness of the whale.

“Everyone was so surprised. We almost didn’t believe what we saw. I was super happy and thankful that I got my phone back. The whale is so kind,” she continued. 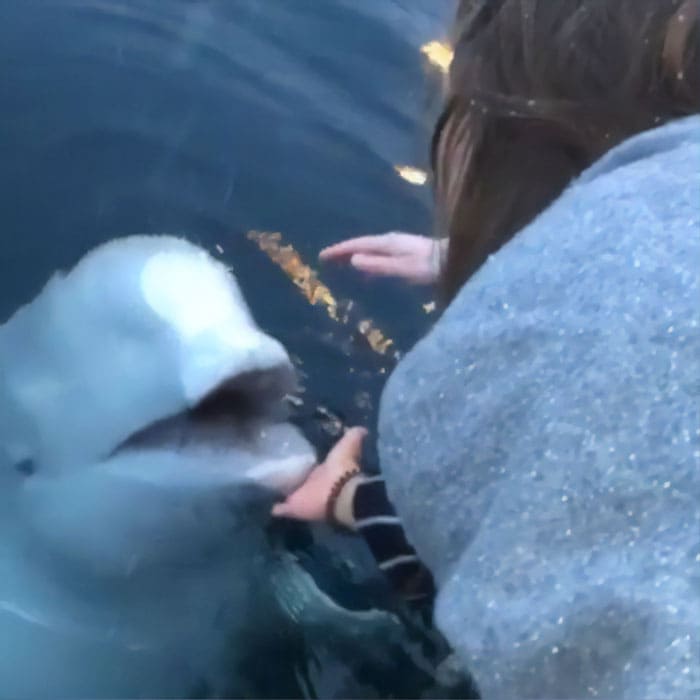 The polite and smart whale was living not far from a small harbor near Hammerfest at that time. Some fisherman spotted it wearing a harness with the words ‘Equipment St Petersburg’ imprinted on it. They guessed that it was well-trained by the Russian Navy.

Although Ina’s phone couldn’t be repaired, she still got the happiest and most memorable moments in her life. The cuteness and kindness coming from living creatures can always touch the deepest part of our hearts. If you love this intelligent whale, just share the video with your family and friends.

Sweet Ragdoll Kitty Gently Has Fun With His Koi Friends

Abused Puppy Is Rescued, Burying His Head In Human’s Arms

Decked Out In A Suit Of Shimmering Neon Blues And Purples, This Jaw Droppingly Beautiful Bird Clings Onto Survival!