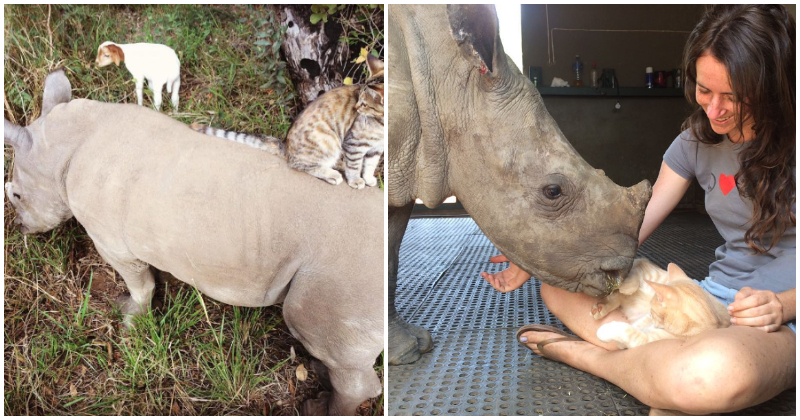 There is no barrier in the friendship of animals. A cat can befriend a dog. A baby monkey can build a special bond with a lion cub. A goat can make friends with a tiger – its predator. The friendship can blossom between two animals of two different species. I think it’s one of the purest and most beautiful things in this world. And, Jamila the orphaned baby rhino and Mewie the cat do the same. The two become best friends forever of each other, living happily together. Jamila had gone through a tough time before she was rescued by Jamie Traynor, Mewie’s owners. The poor little rhino was attacked by a poacher with a machete while she was trying to protect her mom. Unluckily, her mom couldn’t wait until she got help.

The calf become an orphan. Thankfully, she was saved and transferred to the Rhino Orphanage. To reduce the stress of baby rhinos, staff need to blindfold and put earplugs on them. “When we pick them up, they don’t know what’s happening, and they’ve lost their mum,” the staff at the rhino orphanage said. As Jamila was too young, Jamie spent a lot of time with her. This helped to comfort the poor calf. Her cat, Mewie joined this work. The adorable cat loved to act as the rhino’s babysitter. “If we were sleeping in a room, Mewie would sleep there. If we went on a walk, he would join us there.”

The cat gradually gained the trust of the motherless baby rhino. A friendship began to blossom. You can watch the lovely video of two odd friends below.

“I think Jamila really like the company, they were very cute together. To see a cat and a rhino together, I nearly died,” Jamila said. The odd friends spent time walking, eating and playing together. They have a strong bond that spreads positive energy to people around them. It brings much-needed smiles for them. Interestingly, both love snuggling up to their humans to ask for cuddles and belly rubs.

15+ Sweet Photos Of Humans Sleeping Soundly With Their Pets

Meet Nuk, An Orphaned Gerenuk That Doesn’t Drink Water During His Entire Life

25 Animal Moms Describe What It Means To Be A Mother