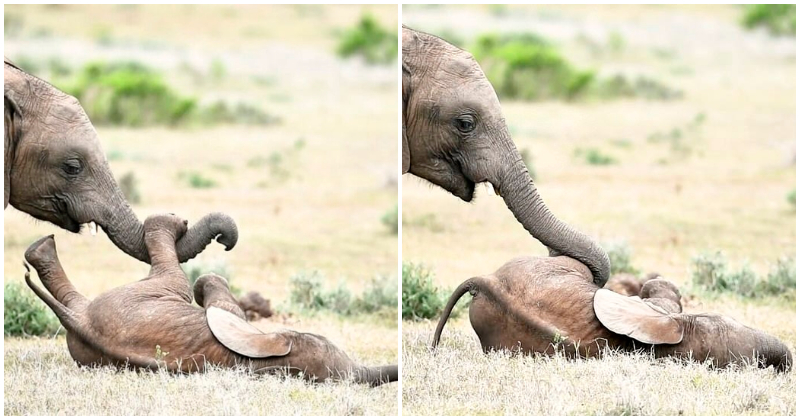 Baby elephants are the most adorable creatures on the planet. They are smart and affectionate even when they grow up into giants. I’ve read a lovely story of an adult elephant asking his caretaker to sing a lullaby for him every day. Their eyes are so innocent and their soul is so pure. And we, humans, can’t get enough of the cuteness of these huge animals. A wildlife photographer named Lee-Anne Robertson captured on his camera adorable moments of a playful baby elephant playing with his big brother. When he shared these photos on his social accounts, they went viral in an instant. You can watch the lovely footage below!

The joyful calf was spotted wiggling on the floor with laughter when his big brother tickles all over him with his trunk. He couldn’t help but burst out laugh happily. He acted like a young playful boy. His favorite is to playing and hanging around with his older brother. He gets tons of joy and laughter beside his beloved family. And this makes up happy childhood for him. Is there anything better? “I thought he was adorable, just like any baby. He was full of energy and looking for someone to play with,” Lee-Anne said. If you are looking for something positive for these uncertain days, just give these pictures a look. Try not to fall in love with these lovely creatures! Lee-Anne took those photos in the Addo Elephant Park in South Africa. The baby elephant was walking around at the park with his family. He was in a playful mood. He even hitched a ride on his brother’s back, trying to climb on top of him. He fell onto the ground but kept doing this excitedly. Kids can spend 100 percent of energy and persistence on what they love to do. ‘After a while, he threw himself down on the ground and his older brother came over and started touching him playfully with his trunk, as if to ask him to come to play, to which the baby responded and got up and started climbing on his brother,’ the photographer continued. The brother elephant seemed to be very patient with his playful and mischievous sibling. He “cooperated” with his younger brother, letting him do everything he loved on him. Both got fun and laughter, making their day more meaningful.

After getting enough joy, the adorable baby elephant continued to strut away with his family. Let’s share this article with your family and friends!

20 People Who Share An Unbreakable Bond With Their Pets

10+ Hilarious Photos Of Animals Who Are Having A Bad Day