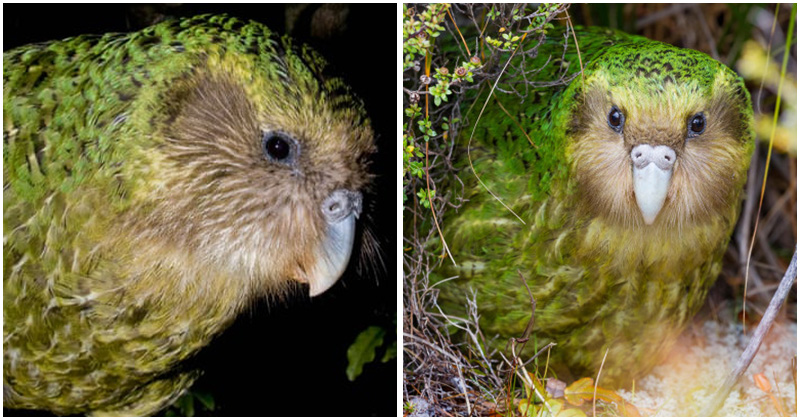 If you often think of parrots as smart scholars who can solve math problems and answer your questions, here is a unique parrot species that will leave you in awe. Meet kākāpō, the fattest and obviously the clumsiest parrot in this world. It is also the only flightless parrot to be spotted in the wild.

Despite these not-so-impressive characteristics, the kākāpō has been named the winner of New Zealand’s Bird of The Year for 2020 just a while ago. In fact, it was the second time the kākāpō took first prize in this competition. The big bird acceded to the throne in 2008 and 2020, making itself the only contestant that won twice in the history of New Zealand’s Bird of The Year.

The kākāpō is also known as the night parrot, owl parrot or the “mighty moss chicken”. It is a nocturnal bird that spends most of its life on the ground.

Kākāpō is not so eye-catching like many colorful birds, but it still looks quite cute with green and fawn plumage, grey beak, short legs, large feet, and relatively short wings and tail.

This lovely green birdy is also one of the longest-living birds on Earth with an incredibly remarkable life span of up to 100 years (of course, if it could last that long in its natural habitat).

During their mating season, the males often gather together and compete by making booming calls and performing a display to attract the females. However, after they mate, the females would fly back to their own territory to lay eggs and take care of the chicks on their own.

Needless to say, these naïve critters are totally vulnerable in front of predators and have always been endangered. They used to live throughout Aotearoa New Zealand, but now they are all moved to two predator-free islands in the country for better protection. Thanks to persistent conservation efforts, their population has risen from 50 during the 1990s to 213 at this moment.

This Goat Becomes The Eyes Of His Blind Horse Friend

One Of A Kind, A Large, Heavy, Nocturnal, Flightless, Lek-Breeding Avian Oddity

Featuring Bright Red Plumage With White Spots, The Strawberry Finch Can Steal The Heart Of Any

Neon Blue And Purple Plumage And Dark Wings, Banded Cotinga Is At The Center Of Attention!

Barring Gray-Brown Back, Pinkish-beige Belly With Bright Red Patch, And Vivid Red Eye Mask, This Waxbill Is Truly A Gemstone Of Nature