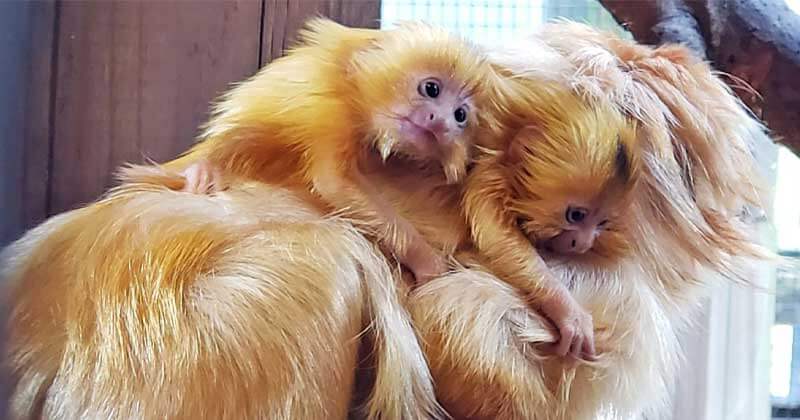 Golden Lion Tamarins are considered an endangered species. Only 2% of these animals can be found in their natural habitats, in the Atlantic Coastal Forest, Brazil. To prevent their extinction, some of these wild tamarins have been raised in zoos. They provide these animals with proper habitat and needed health care.

Recently, Atlanta zoo has got very good news. They have welcomed the arrival of golden lion tamarin twins. The newborns joined the zoo in February, weighing just two ounces each. The golden lion tamarin twins are named Blixx and Tiete. They are one month old now and are doing really great. The birth of these two animals is very important to the zoo. It helps in maintaining and conserving their species.

“in the 1970s the golden lion tamarin was on the brink of extinction, with only 200 tamarins left in the wild” Atlanta Zoo stated.

“In the 1990s and early 2000s, a successful cooperative breeding program led to zoo-born tamarins’ reintroduction, including two family groups from Zoo Atlanta, into the Atlantic Coastal Forest,” the pressed added.

Thanks to those great efforts and successes, the wild population of golden lion tamarins rebounded to around 3,000 animals. In recent years, however, its population has decreased dramatically. The main causes are the loss of their habitats and yellow fever.

That’s the reason why the arrival of the golden lion tamarin twins becomes one of the biggest events of the Atlanta zoo.

20+ Pet Who Will Never Forget Their Visits To The Vet

Vibrant Orangey-Yellow Face And Reddish-Brown Legs, Red-Shanked Douc Is One Of The Most Colorful Primate On The Planet

30 Pets Who Join Their Owners In Halloween Costumes, And They Are Awesome

Owl and Duckling Stay Together In A Nesting Box, Captured By A Wildlife Artist