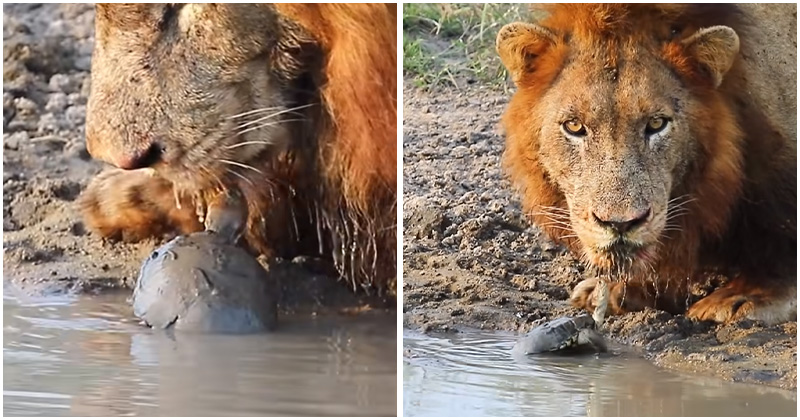 Sharing is caring, but it also means you don’t have to share if you don’t care. This is probably exactly what this little terrapin thought when two lions showed up in his territory, he had his every own way to tell them that they were not welcomed at all.

The funny incident took place near the Sand River in the Mala Mala Private Game Reserve, Greater Kruger National Park, South Africa and was filmed by a safari guide named Reggi Barreto. In the video, two lions, one male and one female, approached a waterhole to drink water and were both disrupted by a tiny turtle who clearly thought of himself as the king of the wallow.

He seemed to be really pissed-off when these intruders appeared from the middle of nowhere and ruined his peaceful life. Because of his somewhat aggressive attitude, the big lions were forced to walk away.

Just take a peek at the amusing moment:

According to Reggi, both he and his guests were “pleasantly surprised” by that exceptional scene. It’s true that they were there to see the lions, but what they saw is not what they expected. It was just beyond expectation.

According to the 30-year-old man, he had been working for quite a long time there but it was still his very first time to witness such a scene. The guide also shared that these lions were far from tame and kind. Actually, he and the tourists even heard about them hunting a young zebra before reaching the spot.

“It was an incredibly rare sighting for me to film – watching the terrapin approach the lions that had blood on their chins from the zebra,” he said. “It seems as though the terrapin was actually more interested in getting some of that blood, as opposed to ‘chasing the lions away’.”

But still, the appearance of the funny turtle was definitely something that they would never forget. And Reggi was glad he was there to capture the impressive moment too.

“Is all about understanding animal behavior and predicting what they will do next,” he continued. “It requires plenty of patience searching for animals and spending time with them to see how the sighting will pan out!”

10+ Newborn Animals That Can Melt Your Heart With Their Cuteness

10 Terrible Cat Jokes That May Make You Cringe

10+ Marvelous Animals That Were Born With Masks

Neon Blue And Purple Plumage And Dark Wings, Banded Cotinga Is At The Center Of Attention!