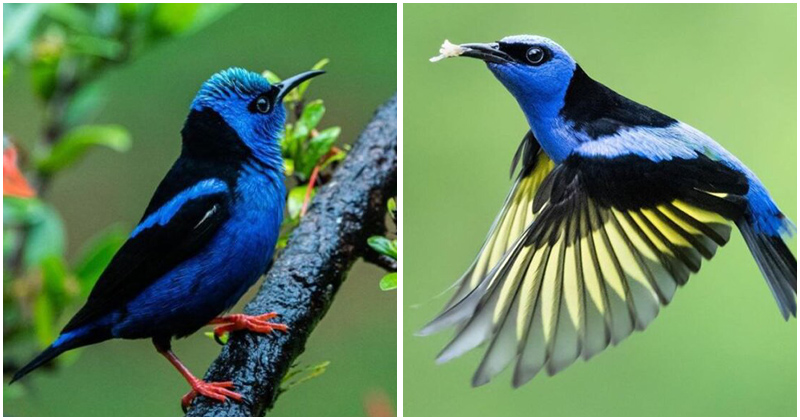 If you ever visit the New World and accidentally spot a flying sapphire passing over in the air, there’s a high chance that you have just met one of the most striking birds in this world – the red-legged honeycreeper, also known under the binominal name of Cyanerpes cyaneus. With a gorgeous blue coat, this unique birdy is hard to forget once you have the opportunity to admire its beauty in real life.

The red-legged honeycreeper is a songbird in the Thraupidae family (also called the tanager family). First described by Swedish naturalist Carl Linnaeus in 1766, this small bird is 4.8 inches long on average and weighs only about 14 g each.

The male red-legged honeycreeper has mesmerizing cobalt-blue plumage, black back, wings and tail, lovely turquoise crown and eye-catching red legs. Above all, it also owns charming lemon yellow underwings that are only visible while flying.

The female, however, is a bit duller with an olive-green coat, red-brown legs and faintly streaks on its belly.

The juveniles often resemble their mother, except the male ones have some prominent blue patches on their underparts.

As we mentioned above, this songbird species is mostly found in the canopy and mid-story forests of the tropical New World, from southern Mexico south to Peru, Bolivia, Brazil, Trinidad, Tobago and Cuba.

These tiny birds often form small groups to live together, ranging from a few to 20 individuals in each group.

The red-legged honeycreeper mainly feeds on nectar and berries, but it rarely says no to other fruits or some insects if it stumbles upon them while foraging amongst the foliage.

This bird’s breeding season starts in April and often ends in June. After mating, the female is the one to build a cup-shaped nest and incubate its eggs for about 12 to 13 days. After the eggs hatch, the male will help with feeding the hatchlings for the next two weeks until they’re strong enough to fly away on their own.

The red-legged honeycreeper is not a rare bird and its population is still stable over time.

Let’s take a look at this fascinating critter:

10+ Animals Who Rock Their Glorious Hairstyles

10+ Animals That Deserve To Be Called A Hero