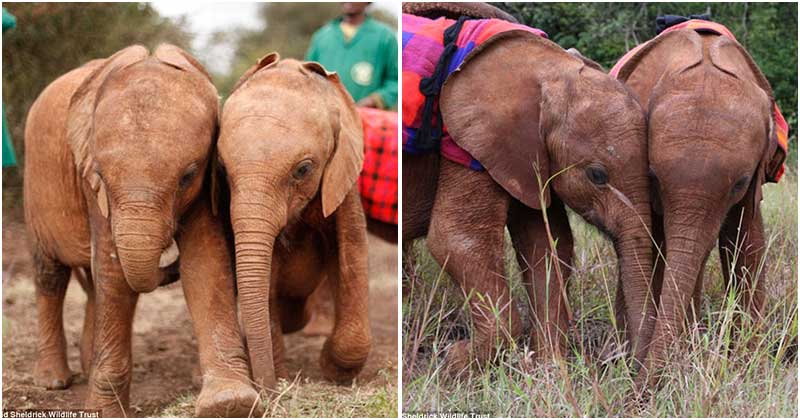 Nothing is better than having a family with parents and siblings. It’s where we are truly loved and cared for. Animals also dream of this. Unluckily, some poor animals are abandoned right by their moms and herds. Some can struggle until some kind-hearted people come to help them but some don’t. And, none of us want to witness that scene. Kamok and Ashaka orphaned baby elephants in this story are lucky ones. Both had endured a lot but thankfully, they were rescued in time and brought to a safe place. That’s not all. The duo soon makes friends and becomes inseparable.

Actually, Kamok and Ashaka were taken in by the David Sheldrick Wildlife Trust at different times. But they lived on the same roof and soon form a special bond. Kamok was found abandoned by her mother and her herd when she was just one day old. The newborn was unable to walk properly.

The poor animal wandered into a camp in the Ol Pejeta conservancy. The rangers here hand fed her with the milk bottle. Three months later, three-week-old Ashaka was spotted at the bottom of a deep waterhole. Rangers at the Kenyan Wildlife Service in Tsavo East heard her distressed screams, so they came to help her. Luckily, she was saved. They were fed with a special formula of milk as they were still small. Kamok and Ashaka soon build a strong friendship. They love spending their days playing with their friends. The two roll around in the mud, chase warthogs, and bash bushes. They grow up
into adorable and playful baby elephants. Rob Brandford, UK director of the David Sheldrick Wildlife Trust, said: ‘The bonds between elephants are extremely close and important.

When they are healthy and strong enough, both will be released back into the wild to integrate with herds. Regarding the David Sheldrick Wildlife Trust, it was found in 1977 by Dame Daphne Sheldrick D.B.E in memory of her late husband. The organization has cared for more than 150 endangered elephants and black rhinos. 20 Animals Who Rely On Humans For Support