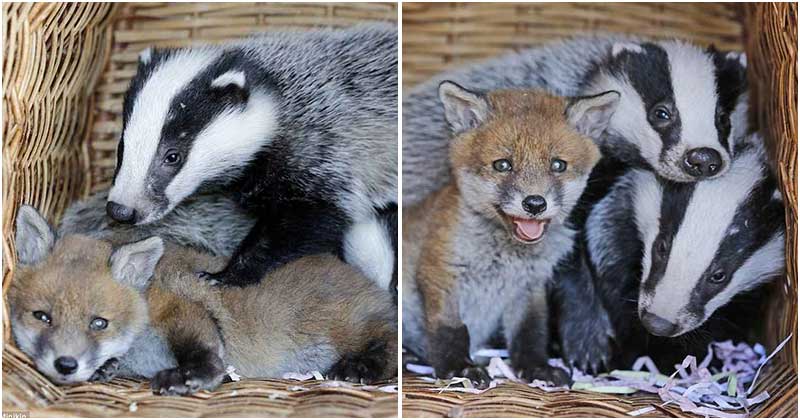 Nothing is purer and beautiful than the friendship between wild animals. They are not from the same family and breed but still build a strong bond. It’s something marvelous that comes naturally when these animals stay with each other. And, today’s story tells a heart-warming friendship like this. Phoebe the abandoned baby fox builds a special bond with two orphaned badger cubs at Whitby Wildlife Sanctuary in North Yorkshire.

Phoebe was found alone in a cardboard box in Leeds and two orphaned badger cubs were spotted wandering in the street in Meltham, West Yorkshire. They were brought to the Whitby Wildlife Sanctuary. But there, one trouble occurred. There was no other fox for Phoebe to stay with. The staff didn’t want the poor little fox to stay alone, so they placed Phoebe with two other rescued badgers.

This was quite a challenging decision. The reason is that badgers and foxes do not get along in the wild. “Foxes and badgers would never mix in the wild, in fact they tend to keep out of each other’s way,” Alexandra Farmer, chief executive of Whitby Wildlife Sanctuary said.

“But these three were wild animals without their mothers, all of a similar size and we thought we could place them together as long as we kept a close eye on them,” she added. The staff kept keeping their eyes on the odd trio. There might be reluctance at first but a friendship started blossoming. The odd friends got along with each other. They love spending time playing, eating, and sleeping with their friends. All the lonely souls are healed.

Especially, the adorable baby cub doesn’t hide its happiness when staying with its friends. There are smiles and laughs. Their special bond actually astonished the staff at the sanctuary. When they shared adorable photos of the trio on social media, they went viral. People can’t get enough of their cuteness.

If you are looking for something positive during this uncertain time, just give this article a look. Simple, sweet, and pure.

This Dog Is Taking Over The Internet With His Musical Talent

35 Funny Animal Memes That Are Totally Worth Looking At

20 Animals That Have Awesome Colors And Patterns