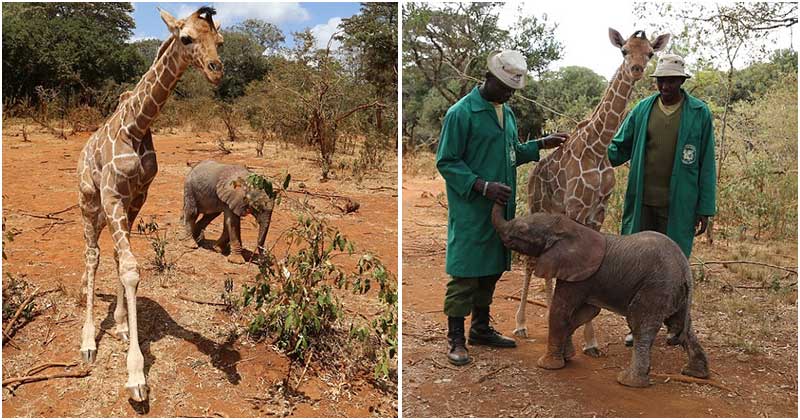 The friendship between wild animals is incredibly beautiful. Two animals of two different species can form a friendship that is strengthened day by day. They love spending time playing, eating, and sleeping with each other. They even hug and cuddle their friend to show how much they love each other. Can’t get enough of their cuteness. Kiko the rescued giraffe and Loboito the orphaned elephant calf in this story have built such a special bond. The two adorable animals have got tons of fun, laugh, and happiness getting along with their friend. Kiko was an abandoned giraffe. He was found helpless, alone, and hungry in Kenya’s Meru National Park. Luckily, the Kenya Wildlife Service spotted and rescued him.

It’s hard to think of what would happen to the poor giraffe if he weren’t rescued. They could hardly survive in the wild as they still rely solely on breast milk. The rescue team then transferred Kiko to a wildlife trust in Nairobi National Park. As he was only one month old at that time, he can’t sleep in a giraffe cage. The staff decided to let Kiko stay next to the elephants. And here, he formed an unlikely friendship with orphaned colleague Loboito, a playful three-week-old calf. Thanks to boisterous Loboito, Kiko gets happy days living in the park.

The park’s staff has been familiar with the scene that Loboito the elephant struggles to keep up when trotting behind his leggy Kiko. The little elephant loves nothing more than following his friend. And, Kiko the giraffe leans over to snuggle up on cheeky Loboito. The way that the two getting along is so funny and adorable. You can watch the adorable video of the two friends below.

And they all fall in love with their odd friendship. It might make us, human adults admire. And, why don’t you share this heart-warming article with your family and friends?

People Living With More Than 3 Pets Reveal What It’s Like, And It’s Truly Hilarious!

10+ Pets Who Made Their Owners Actually Facepalm With “Crazy” Actions

The Cat With The “Ugliest Sleeping Face In Japan”

Orphaned Kangaroo And Wombat Build A Special Bond, Giving Each Other Love And Comfort