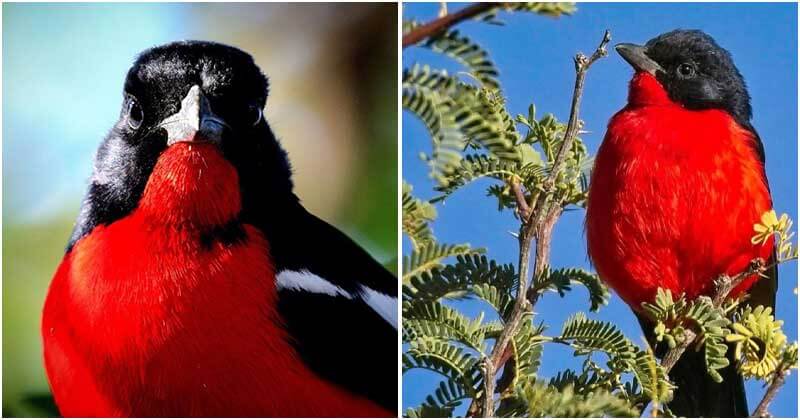 The Crimson-breasted shrike is striking. The perfect red and black plumage makes these birds stand out from the crowd. If it comes to the pinnacle of red, black feathers of a bird, these gonoleks may come first. As you can see, this bird species is black on the head, back, tail, and wings (with white stripes on each). Meanwhile, its underparts are a vivid scarlet. A stunning contrast that makes these birds conspicuous whenever they are. There are also some Crimson-breasted shrikes that have yellow underparts. These beautiful birds are supposed to belong to a separate species. Crimson-breasted shrikes are endemic to Southern Africa, from Angola and Zambia into northern parts of South Africa, with populations also residing in Nambia, Botswana, and western Zimbabwe. This bird species feeds on ants, beetles, caterpillars, and fruit. They seek their food on leaf litter, tree trunks, and whatever they spot on the ground. During the breeding season (peaking from October to November), both male and female crimsons build their nest on n the fork of a tree or sometimes on a horizontal branch. These nests are made from Acacia tree bark, grass, rootlets, binding together with the spider’s web. Female birds lay 2-3 eggs then incubate them for around 15-17 days. Unlike many other bird species, male Crimson-breasted shrikes join the incubation process. They also help females feed the chicks until they are fully-fledged. Currently, the population of Crimson-breasted shrikes is quite stable. Their habitat has been preserved and expanded.

You can watch the video of this stunning bird below.

If you want to read more interesting posts about birds, please visit our website.