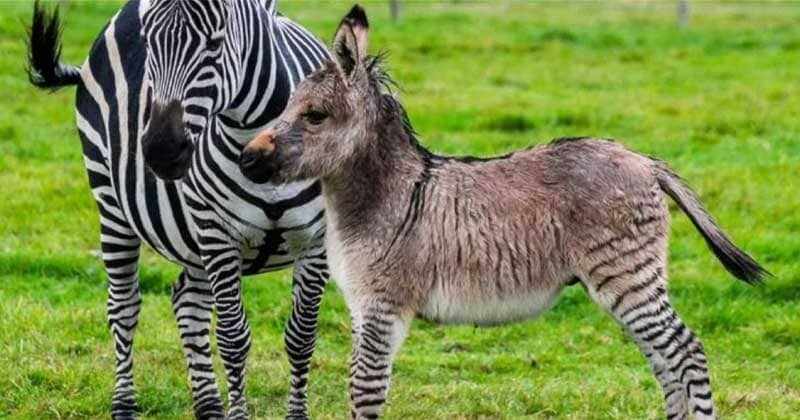 Hybrid animals are awesome. They inherit all the best physical features of their father and mother. Looking at these adorable creatures, you can definitely know who their parent is. This extremely rare baby zonkey is an example. The cute baby animal was born by a zebra mom and a donkey dad. Some of its photos were shared on the Internet and went viral. People can’t get enough of its cuteness.

As you can see, the baby zonkey has stripes all over its legs like its mom. But the cute tiny creature wears the same coat as its dad. These characteristics combine cleverly, making the zonkey striking in the wildlife. The little foal and its mom were found in a cattle herd of a woman near the Tsavo East National Park. The zebra was supposed to “escape” from the park and joined the herd. It was then brought to the Chyulu National Park by the Sheldrick Wildlife Trust – an organization that rescues and rehabilitates animals in Kenya.

The zebra mom mated a donkey here and gave birth to the cutest-ever foul, “zonkey”. “Earlier this year, our fence maintenance team caught a glimpse of the zebra with a tiny foal by her side,” the group wrote. “At first, we thought that it had just been wallowing in the mud bath, but then the truth dawned on us: Our wayward zebra had given birth to a zonkey!”

The zonkey is a highly unusual hybrid. And, people can’t keep their eyes off this adorable, unique creature.

15+ Kindhearted People Who Adopted Homeless Pets And Made Them Happy

The Tri-coloured Parrot Finch is a True Jewel-Toned Beauty

20 Animals Who Do Things In Their Own Weird Way