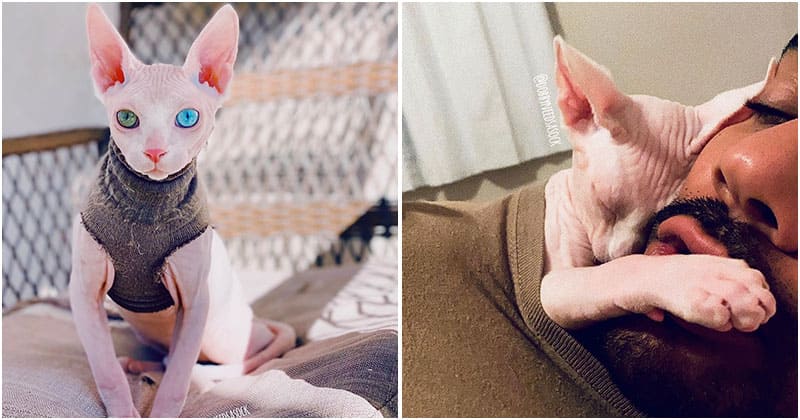 Marcus is a big man, covered in tattoos. With his appearance, he thought that a big dog would be his best choice for him when it comes to getting a pet. However, his mind had changed after he met a tiny hairless kitten named Dobby. When Marcus brought Dobby home, he fell in love with it immediately. The kitten also loves his parents, especially his dad so much. He always asks to come into his dad’s shirt, pokes his head out, and just hangs out. Just like other cats, Dobby doesn’t like water. He is scared whenever his dad baths him. However, when Marcus brought Dobby in over the sink to bring it closer to him, he calmed down. “I’m allowed to put him close to me and wash him. He is calm and relax.” “I was used to a big, giant 100lb+ dogs. In the beginning, I thought it was the honeymoon phase where I just wanted to be around him, was obsessed with him. But weeks have passed, months have passed and I still don’t want to separate myself from this kid, ever,” Marcus shared. Marcus never wanted a cat until he had Dobby. Special thanks Marcus for sharing the story with us. If you love Dobby, you can keep up with him on Instagram and TikTok. What do you think about this post? Tell us your thoughts in the comments below! Please share this story with your friends and family members!

30 Photos Of Sweet Cats With Their Adorable Curled Paws