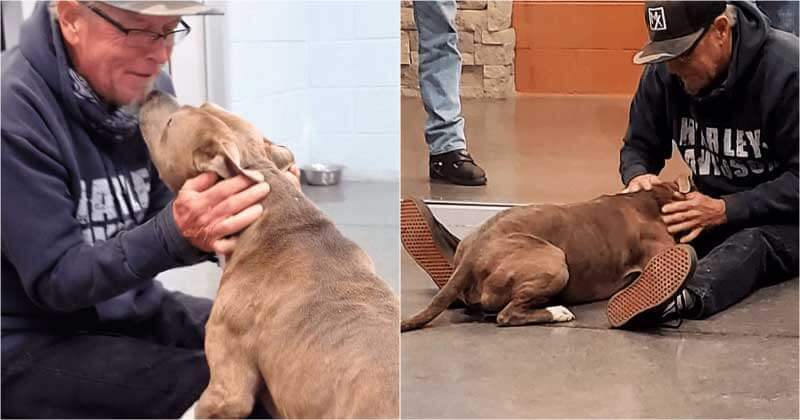 Every reunion is priceless, then can warm up our hearts. Nothing is better to find someone that you think you almost lost them. Our post today is about a loving reunition, too. A dog named Blue cries when finally reuniting with his dad after 200 days apart. Keep scrolling! Blue had gone missing from his Tennessee home six months ago. Even though his dad tried his best to search for him but nothing happened. The man eventually had to move to Texas for work. He thought that he’d never see Blue again. And, Blue was apart from his dad for about 6 months. He kept walking on the streets and once bravely showed up at a stranger’s house, looking for a safe place to rest. And, the house owner contacted the Washington County Animal Shelter to help the dog. An animal control officer rushed over to pick Blue up and brought him to the shelter. He stayed in his kennel for months as the shelter closed its doors to the public due to the pandemic.

Tammy Davis, the shelter’s executive director said that Blue was a little shy at first but he was extremely affectionate to people and very loving to the staff. To help Blue find a forever home, the shelter shared a video of him playing with his favorite toy on their Facebook page.

And just moments later, the video got a comment read, “That’s my dog.” A friend of Blue’s dad spotted him on the video and showed his dad immediately. This meant a lot to Blue and his dad, leading to their reunion. To prove that Blue is his dog, Blue’s dad sent the shelter pictures of Blue in his home with that same blue ball – his favorite toy. He immediately drove 1,200 miles to get his dog. Blue was shocked for a split second when seeing his dad standing in front of him. The boy can’t believe that his dad finally found him after 200 days of separation. Both gave each other kisses and his dad also started crying. It just was great.

You can watch the loving reunion here.

If you are looking for heart-warming stories, just give this a look. A pretty thing to start your day.

Abused For Years At Zoo, Cougar Is Rescued In Time And Learns To Walk Again