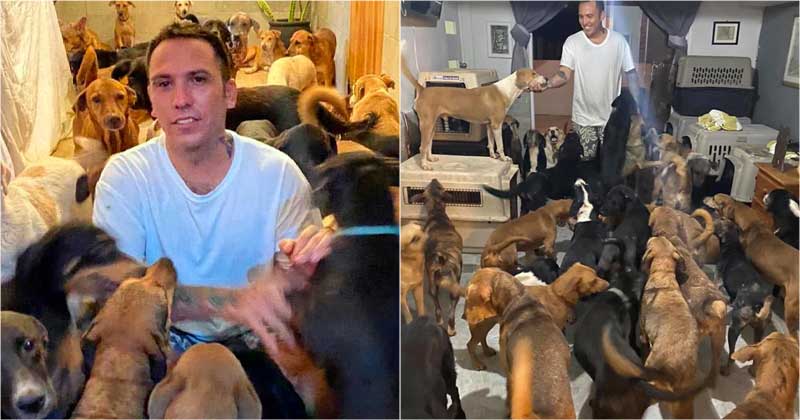 There is nothing worse than seeing homeless animals wandering around looking for help. We don’t need to force ourselves to act like an angel but all we should is choose kindness whenever we can. The man in this story does the same. He offered a sleepover to 300 dogs to keep them safe during the hurricane. Keep scrolling!

Ricardo Pimentel is the owner of Tierra de Animales, an animal sanctuary on the outskirts of Cancun. It’s surrounded by jungle. Over the past nine years, he has cared for and given a home to over 500 animals — including stray cats, dogs, chickens, turkeys, horses, sheep, pigs, cows, and donkeys. When hurricane Delta roared toward the shores of Cancun, Pimentel had to face some choices. He was worried about the safety of shelter dogs. Their shelters weren’t strong enough to stand up to a Category 4 storm. The man took matters into his own hand. He decided to bring all 300 dogs into his for a sleepover. This could protect them from the hurricane. He shared his ideas with volunteers and all joined. It took them about five hours to round up the pups and bring them inside before the hurricane made landfall. Although it was not an easy task, they did fulfill. 300 dogs all stayed safely inside his house. “We had to bring them in on leash two by two,” Pimentel told The Dodo. “Some of them are afraid or don’t know how to walk on a leash, so we had to carry them to the house, but in the end, it was worth it because they are all safe.” At the beginning, the big gang actually found it hard to stay in such a small house. They made a bit of a mess. But everyone seemed to get along later. “They were actually very well-behaved all night,” he said. Luckily, the hurricane was only a Category 2 storm when it hit the sanctuary. The next morning when it had been finished, Pimentel and the volunteers had to do a lot of repairs and removed trees and branches from animal shelters. 300 shelter dogs stayed in his house until 5 or 6 p.m before returning to their shelters. They’re all safe during the hurricane.

Kindness is priceless when coming at the right time. Do you love this story? Let’s share it with family and friends!