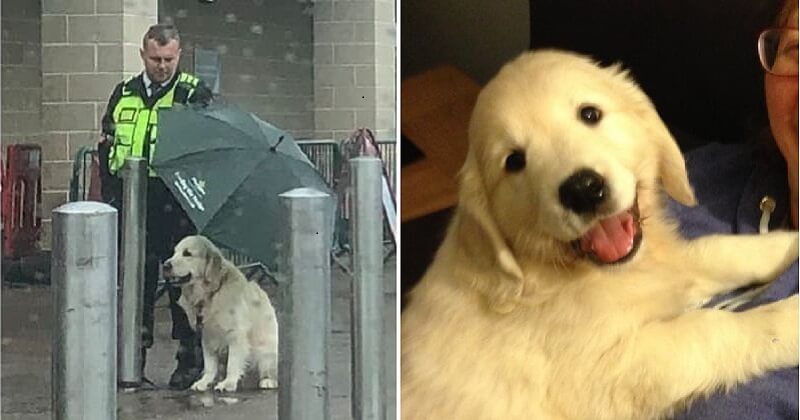 A security guard at Morrisons supermarket in Scotland, has made a lot of people happy after a photo of him shielding a dog from the rain with his umbrella went viral on Twitter.

Mel Gracie, a 25-year-old tattoo artist from Glasgow, saw this heartwarming scene and managed to take a picture. She later shared it on Twitter with the caption: “Shout out to this @Morrisons security man keeping this good boy dry. He said, ‘Well, you never know how dogs feel about the rain.’” The photo quickly went viral on social media, and the security guard was soon identified as Ethan Dearman. It was not surprising when the internet showered him with praise and thanks for his kind and sweet action. Many people even called him a “hero” and “legend.”

In an interview with Insider, Dearman said that he was doing his work when he stumbled upon a lone golden retriever waiting for his owner outside the supermarket. When it started raining, he grabbed one of the store’s extra umbrellas to shield him from the downpour. “I try to keep an eye out for dogs,” Dearman shared. He told that this wasn’t the first time he’s held an umbrella for a dog. A day before the viral incident, he was helping a husky stay out of the rain.

Thanks to the power of internet, the dog’s owner David Cherr, could see the photo. He later posted on Twitter to thank Ethan for his act of kindness. “Thanks to security man @dearmanethan for putting the umbrella over Freddie when it started to rain! So kind! He’s always so nice to my brother Stuart, my Dad and our Freddie! Here’s Freddie when he was a puppy!”

David then posted another tweet to explain a little bit about the situation: “Our dog Freddie has went viral after a kind security man put up his umbrella for Freddie when it started raining at the Morrisons near my parents house. Good community vibes. People looking out for each other. He’s always nice to my Dad and brother, it’s nice to hear nice things.” The internet fell in love with the dog and Ethan’s action. They even started asking to give Ethan a raise and recognition.

“@Morrisons you need to recognise this guy and make him aware of how much the world loves him,” one user replied.

Other users quickly responded to the adorable photo, with one writing that Dearman was “a hero.”

“What a lovely thing to do,” another added. “Give this kind person a pay rise.”

Dearman said that the response has been overwhelming. “It allows me to cross one thing off my bucket list: becoming famous for doing something good.”

Dearman responded to all the retweets and comments, writing: “Looks like I made a lot of people happy today.”

What are your thoughts on this? Let us know your thoughts in the comments section below! Be sure to share this heartwarming photo with your friends and family members to make their day brighter and warmer!

20+ Ways Of Dogs Chilling In The Park, And They Will Make Your Day