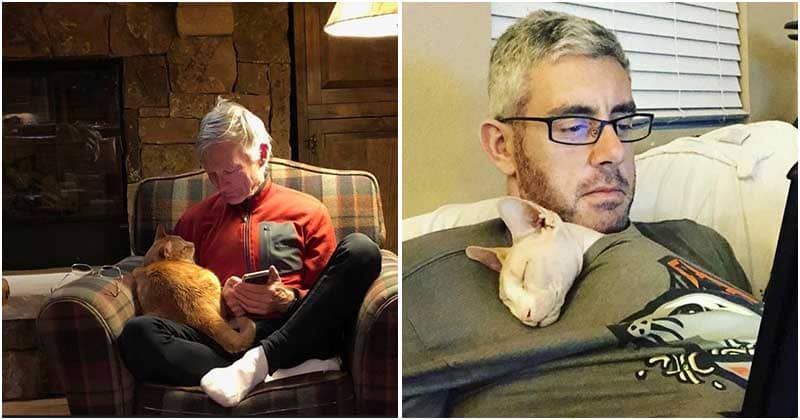 Some people are into pets, however, while others, especially men, simply aren’t interested. They say “no” to a pet in the house, and this is not negotiable. However, everything had changed after they saw a few fluffy paws in their house. Those tough dads and husbands turned out to be the first ones to fall in love with these furry friends. They start sleeping in the same bed with them and cuddling with them all day. In fact, they became best friends.

We believe that pets are able to win anyone’s heart, even the toughest guys, and these photos prove it. We hope you will be in a great mood after looking at these pictures! Scroll down to check for yourself! 2. “He was a firm opponent of the hairless cat but skin to skin is the best way to connect.” 3. “No matter how much I begged, my dad never let me have a pet when I was younger. This is him dragging my cat in a box (which he named The Kitty Express) while making train noises and laughing like a child.” 4. “My dad: ’CAN WE RETURN IT??? IF WE KEEP IT, IT CAN’T GO ON THE FURNITURE AND I WANT NOTHING TO DO WITH IT.’ My dad, out loud, mere days later: ’Let’s move this pillow to give you more room. Are you comfy? Do you want some pets? Let’s read together.’” 5. “It took 3 years to convince him since ’he’s more of a cat person.’ He finally agreed as long as the pup wasn’t allowed on the bed or any furniture. This is now what I wake up to every morning.” 6. “Dad went from: ’You’re taking him with you when you leave,’ to ’Are you really gonna take him with you?’” 7. He still doesn’t admit he loves his cat. 10. “He never wanted an animal in the house and now they have matching sweaters!” 11. “My husband ’doesn’t like cats’ and refused to let me get a kitty for the longest time. He now gives the kitten a dab of cream cheese every morning and naps with him on the couch but insists that he doesn’t like the little dude.” 12. “My sister told me I should post our dad on here. Our dad used to always say, ’I don’t want animals at home!’ I just received this picture. Also, he told my mom that the dogs are all his.” 13. “My dad-who-did-not-want-pets comforting a scared pup on his first vet trip” 14. “My husband is allergic and hates cats.” 15. “Dad: ’If we get a tortoise I’m not looking after it.’ Also Dad: ’Get comfy, Hector, and let me show you pictures of your brethren.’” 17. “Dad: ’No cats allowed in this house!’ Also dad: paints picture of our cats to hang at home…” 20. “My boyfriend who thought all cats were evil is now doing indoor rock climbing to reach her. Why? Because he wanted to kiss her forehead.” Do you have stories of when one of your family members hated pets and now they love them more than anything and can’t live without them? Let us know in the comments and share their pics with us in the comments below!

10+ Men Who Were Against Getting Pets, But Can’t Live Without Them Now

A Spectacular Close-Up View of a Fiery-Throated Hummingbird

20 Photos That Prove Love Comes In All Sizes And Shapes