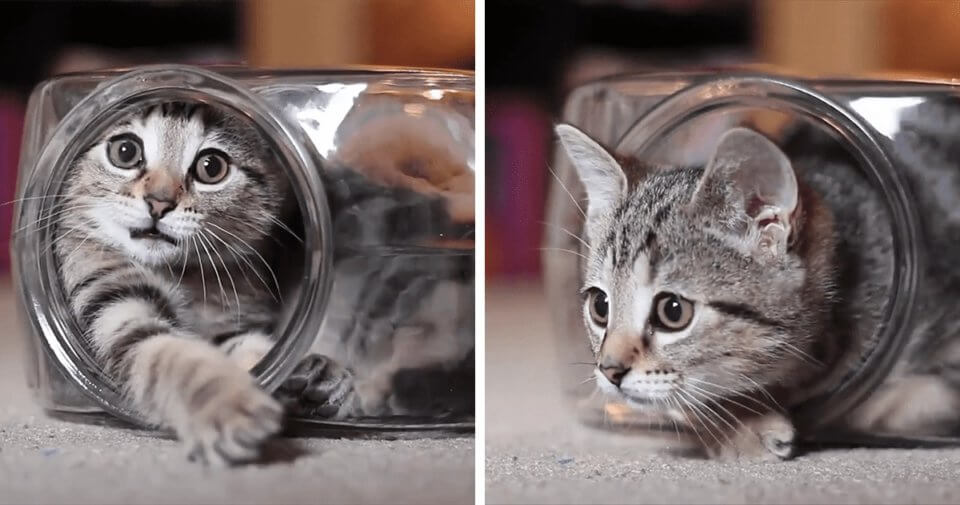 Recently, a video of a kitten playing inside a fishbowl has gone viral on Reddit. It is not the first time that a cat video has taken over social media, but people are still excited to watch and spread it. So it’s not surprising that the video is gaining lots of attention and love from people around the world. The star of this video is a cat named O’Malley. He now lives with his beloved owner Luke Thompson, an American filmmaker (Onemightymoose on Reddit.)

The 20-second video was shared on Reddit on July 26. It shows a tiny black-and-white furred feline playing in a glass jar placed horizontally on a carpeted floor. The cat twirls around inside the blow a few times and enjoys her time. After a few seconds, a bright pink coloured ball catches the kitty’s attention and she gets diverted completely. The clip ends when she launches herself out of the fishbowl in search of the toy. His owner decided to share this funny and adorable video with a caption reading, “My little kitten is having the time of his life inside of this fishbowl”. The video quickly went viral on Reddit and racked up over 120.000 upvotes, 800 comments, and a bunch of Reddit awards.

We’re glad he did because the adorable kitten really gets your mood up! And this is what people had to say about this adorable video:

“Of course this cat loves a fishbowl. It is a liquid, where else should it be?” “Cats LOVE having their own personal “cave”. Ours sleep in felted wool “caves” in the winter and adore them. It makes them feel safe.”

“I have no idea what is more awesome, the kitten playing in the fishbowl, or his name!! Abraham DeLacy Giuseppe Casey Thomas O’Malley, O’Malley the Alley Cat!” “Such a buddy this gave me a much needed smile danke.”

“He is so adorable. I have 8 cats and they are forever keeping me entertained. I also have 2 dogs and I love them all!” “Cats are known for the saying “If it fits, I sits”, and this is further reinforced by this video.”

What do you think of O’Malley and his new play area? Tell us your thoughts in the comments below and don’t forget to share his video with your friends and family members!

30 Photos Of Sweet Cats With Their Adorable Curled Paws

20+ Tweets Proving That Pets Will Turn Our Lives Upside Down