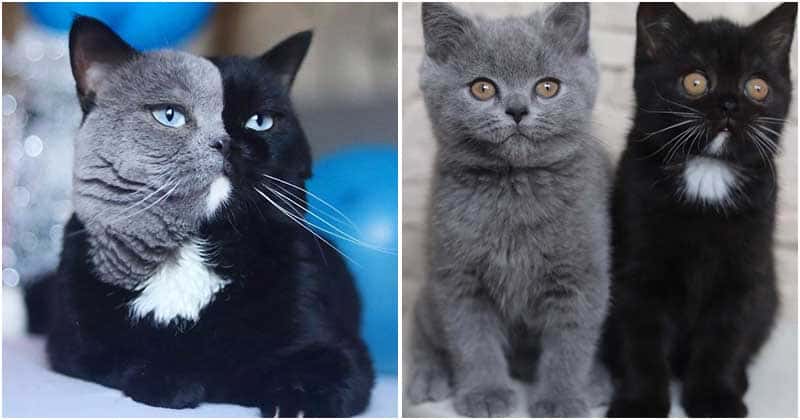 Narnia is a special cat in many ways. He has blue eyes and a face precisely split into a gray and a black side. With his unique split face and special features, he conquered hearts on the internet when he was just a tiny baby. Narnia’s owner, Stephanie Jiminez, a professional cat breeder said that he was born in Paris, but he now lives his life in Britain. “When Narnia was born I was extremely surprised. I knew immediately that he was exceptional.” Now, he is one of the most famous cats to have a two-color face. Now he grows into a full-blown heartthrob and becomes a father to two kittens with fur color on both sides of the Narnia face. His two offspring, gray-haired Phoenix and black-haired Prada, are lucky to get the best of their dad’s good looks. What an amazing thing! “It’s not the first time and most likely not the last that Narnia has been a parent. He has already been a father several times, and all his kittens are of different color variations,” Stephanie said in an interview with Bored Panda. We are happy to hear that Phoenix and Prada are shortly to move into their new home. Stephanie also said that Narnia will welcome his new kittens around June 29. Narnia was previously thought to be a rare chimera cat because the cause of his face is usually down to a genetic anomaly called chimerism. However, Stephanie said that genetic testing revealed that wasn’t the case. “A geneticist performed tests and [found] Narnia has only one DNA… there remains a mystery for science,” she said. We were stunned by this good-looking cat family, and you? Feel free to share your thoughts with us in the comments below! Be sure to share this article with your friends and family members! Artist Paints Zodiac Signs As Witches With Their Cats

Stray Cat Begging To Be Let Inside House, Then The Owner Realizes That She Is Not Alone