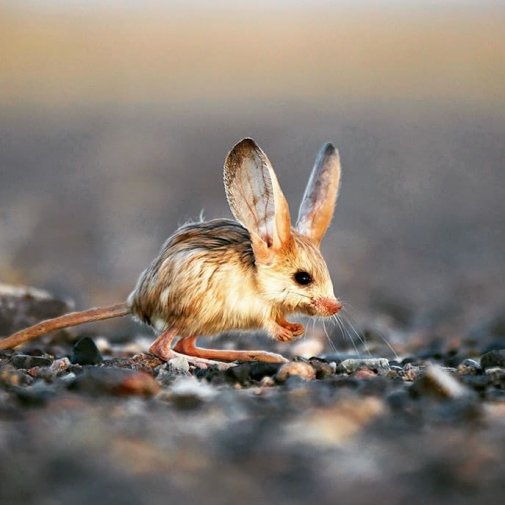 You can find many animals out there that do not look like others of their breed. They were simply born to be different. These animals will shine in the way they are supposed to be. This adorable little long-eared jerboa is the perfect example of that. It has a mouse-like body, rabbit-like ears, a pig’s snout, and kangaroo-like back legs. A mix of 4 species but still adorable, right?

The photos of this adorable long-eared jerboa have stolen the heart of millions, especially those who are in love with this little creature. If you are looking for mysterious, weird animals, just give these pics a look. It will make your day!

This cute long-eared jerboa looks like a cross between a mouse, a rabbit, a pig, and a kangaroo

The long-eared jerboa is a rare, nocturnal, mouse-like rodent. It’s also known for its exceptionally large ears and a long tail. The animal is around 2.8 to 3.5 inches long while its tail is double this size. This weird jerboa was first caught on film in the wild in 2007 during a Zoological Society of London expedition to the Gobi.

Additionally, long-eared jerboas have the largest ears relative to their size in the whole animal kingdom These long-eared jerboas are native to the deserts of southern Mongolia and northwestern China. Since they’re primarily nocturnal, they spend the day in underground burrows which they dug themselves. The animals mostly consume flying insects.

The lifespan of a long-eared jerboa is around 2 to 3 years.

As long-eared jerboas have back legs that look like a miniature model of a kangaroo’s, they can jump pretty high. The front legs are relatively small, and it doesn’t use them for getting around. “Jerboas have very erratic locomotion, adopting a zigzag trajectory, and can jump several feet both vertically and horizontally, even though they are usually about the size of your fist,” Talia Yuki Moore, a Harvard graduate student studying locomotion in three jerboa species, told National Geographic.

The animal’s tail is double the size of its body

15+ Animals Who Are Good At Expressing Their Feelings