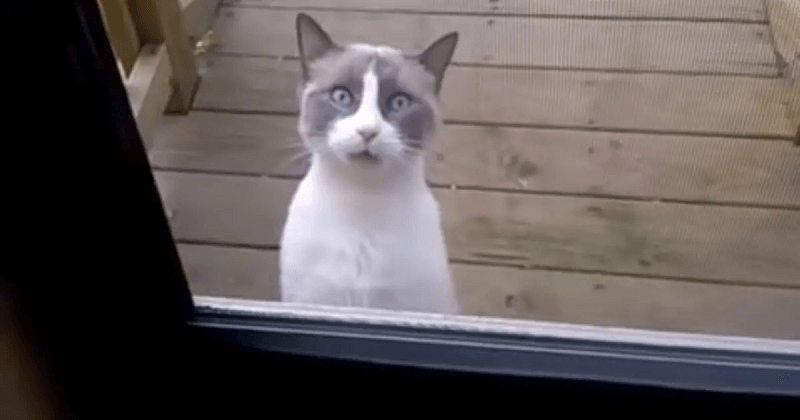 Cats meow mostly for one reason, to communicate with humans. When your cat meows, it is that he or she is most likely asking for something from you. If you let the cat outside accidentally, they will meow to get your attention and beg to get back inside.

The cat in this post also wants to come back home after hanging outside, but instead of meowing as other cats, he has a new way to be let inside. Yodeling is one of those talents that most people appreciate, kind of. But this cat thinks that it is the best way to get his owner’s attention. According to his owner, every time he wants to come indoors, he begins to cry out his own, “Yodel-ay-ee-oo.” The owner told people about her cat’s amazing talent, but sadly no one would believe her. For this reason, she decided to capture his behavior on the video and shared it with everyone.

The video shows two different times of the cat yelling at her back door and begging to be let inside. When the owner refuses to let him indoors, he hisses at her. She tells him, “Don’t you hiss at me.” So the cat gets back to what he does best. You guessed it, yodeling.

Watch the video below:

The owner then uploaded the video to YouTube, where it has gone viral and now has gained over 9 million views. People couldn’t get enough of his cuteness and couldn’t stop sharing and commenting on the video:

“When someone posted on Reddit that speaking French was simply gargling on air, that’s when I realized what this cat yelling sounds like. ????????”

“Cat is plainly frustrated at human unintellegence and asking “Why can’t,you understand what I am telling you “you fool “! my cat gets angry like this when I am late to open the door. When I let her in, and lovingly say few words she lovingly rubs her sides on my legs. Then matter is settled ! She does not continue the anger the way humans do!” “I’ve had similar cat showing up on my porch by the back door so I started feeding him and it was little annoying that even after like 2 weeks she would always wait in the morning and then hiss at me when I was getting out to give her food but then after a month she started being nice and would let me pet her and this summer after being away for most of the spring she showed up again with 3 little kittens and started bringing them for breakfast too.”

“Such touching baby voice! Pity, she had to scare the jippers out of it to film this effect. The kitty is terrified. actually, and trying to protect itself by scaring the threat away.”

What do you think about this cute and funny video? Let us know your thoughts in the comments below! Be sure to share this post with your friends and family members to make their day brighter and better!