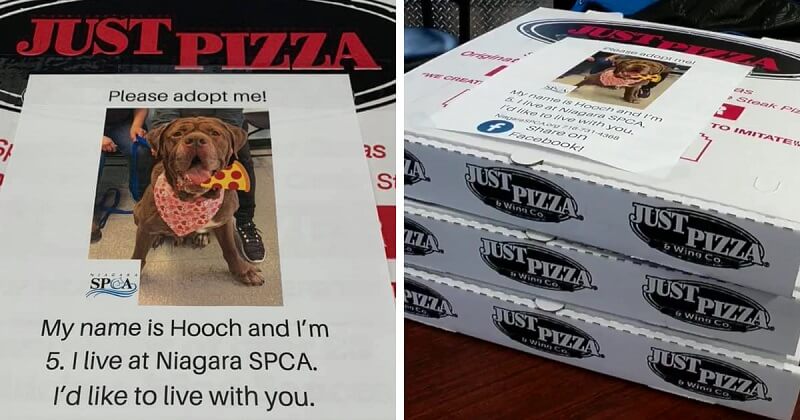 Each year, approximately 1.5 million shelter animals are euthanized in the United States, simply because shelters are too full and there aren’t enough adoptive homes. Moreover, many people tend to buy pets at shop instead of adopting them from shelters. For this reason, animal rescue organizations often have to get creative to help poor animals find their forever homes. Recently, the shelter Niagara SPCA from New York teamed up with the Just Pizza & Wing Co. franchise in Amherst in an attempt to get everyone’s attention and help their animals get adopted. Kimberly LaRussa, an SPCA event coordinator, and Mary Alloy, the owner of Just Pizza & Wing, started to brainstorm ways in which they could further help the dogs in need. Together, they came up with a brilliant and great idea. They decided to put flyers of adoptable dogs on pizza delivery boxes with the hope that the dogs get a chance to find their forever homes When ordering a pizza, customers will receive an especially adorable treat to fill their stomachs while helping out a community organization at the same time. And the yummiest part? Anyone who adopts one of the shelter dogs featured on the pizza box flyers will receive a $50 gift certificate for the pizza shop. The heart-melting campaign quickly went viral and proved to be a success. There were many people in the community who were on board with the idea and were absolutely loving it. The first day after it was launched, a six-month-old puppy named Larry found a new home. The other pets also caught the attention of many potential owners. We hope that they will be as lucky as Larry! Kimberly was overwhelmed, saying, “We’ve had a tremendous amount of interest and support from the community and beyond since the story went viral on Friday. Many people want to order a pizza just to get the shelter dog photo, other pizzerias have offered to put flyers on their pizza boxes, and so many people are tagging their friends and family.” Both the shelter and pizza shop were praised for their ingenuity. Mary said that the pizza shop would continue with the effort “for as long as it takes” to get every animal in the shelter adopted. According to Kimberly, Mary’s business will be adding adoptable cats to the list of adoption flyers in the future.

If you love this awesome idea, please share it with everyone around you! We hope that many shelters and organizations will adopt this idea to help every shelter pet find its forever home.

Born With A “Squished Face” And Got Abandoned Twice, This Dog Finally Finds His Forever Home

20+ Ways Of Dogs Chilling In The Park, And They Will Make Your Day