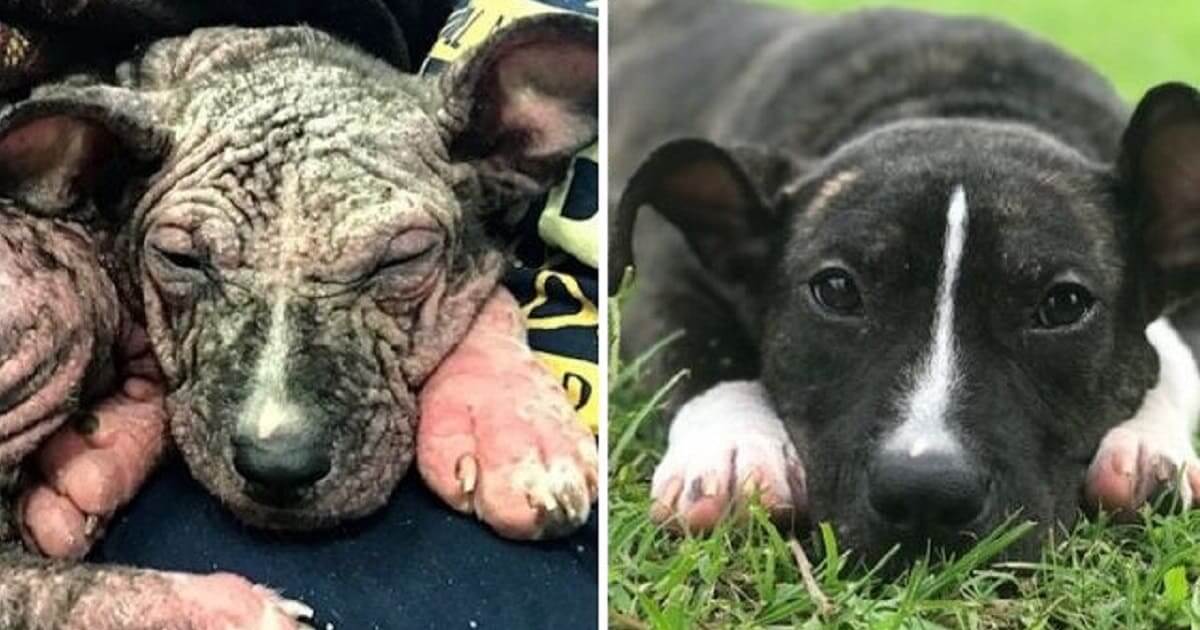 An emaciated, nearly-hairless stray dog was found by Onslow County Animal Services (OCAS) in Jackson, North Carolina three months ago. The dog was so weak and sick that he was scheduled to be put down at a shelter. Thankfully, Adoption First Animal Rescue, an organization specializes in saving death row dogs from euthanasia, pulled the pup out of the shelter and placed her with Heather Corradino-Llantada, one of their experienced foster moms. Now, Heather has 11 permanent rescue pets – nine dogs and two cats – in addition to a near-constant stream of special-needs fosters. When Heather took the dog in her arms, she realized that the pup was burning up with fever. She quickly took her to the vet for a check up. Sadly, the pup was diagnosed with anemia and had a severe case of Demodectic mange. Life of a stray dog living on the streets had stunted her growth, so Heather named the puppy Amaani – which means hope, aspiration, and desired it would give her strength in the tough days ahead. “There were several instances that medically, she should have passed away, but she displayed a fighting spirit and will for something better,” Heather told iHeartDogs. “Amaani spoke with her eyes that she was going to fight–I was more than willing to match that will, regardless of the personal sacrifice.” At first, Amaani was extremely fearful and depressed, but after weeks of gentle care and reassurance, she began to show signs of improvement. Now, she is completely unrecognizable from the pitiful pup she once was. She started gaining weight, and her coat was also filled. Thanks to Heather and her devoted foster care, Amaani could survive and thrive. She also learned how to trust and love again with her heart. Luckily, the cute pup was finally adopted and is now happy in her forever home! 20+ Adorable Dogs That Will Make You Love At First Sight

Deaf Dog Sleeps On Streets For 11 Years, Wakes Up From Nap And Realizes His Life Has Changed Completely