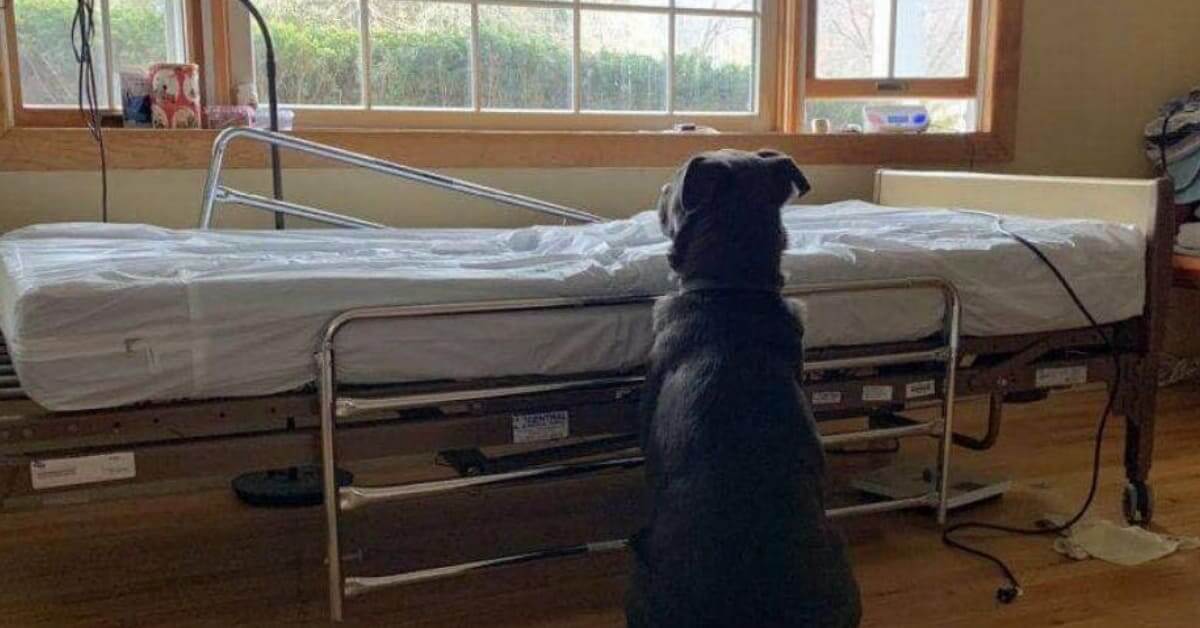 Dogs are some of the most loyal animals on earth, and this unconditional love and loyalty was proved once again by a touching photo of a dog waiting for his owner next to empty hospital bed. Someone captured the heartbreaking moment in a photo, and it quickly went viral on social media in a matter of hours. This is Moose, a three-year-old Labrador mix who would be in danger of getting euthanized because the shelter was overcrowded, and no one was interested in adopting him. Thankfully, a kind man adopted Moose from Eleventh Hour Rescue in Randolph, New Jersey and gave him a new home. The poor dog had finally had his home, but just one year later, his dad passed away due to cancer. Unfortunately, Moose did not know that his dad has gone forever, and all he knew was he needed to be patient and wait. Although the wait is in vain as his beloved human will never return, he still stays there in the hope of a miracle to happen. The volunteers at Eleventh Hour Rescue were heartbroken, and they quickly took Moose into their shelter. At the shelter, everybody loved Moose and worked hard to make sure him got adopted soon.

“When the owner passes away, Eleventh Hour’s policy is we take the dogs back no matter what,” Linda Barish, an Eleventh Hour Rescue executive committee member said. “We never in a million years thought that this would happen.”

*** 6/22/19 Update: MOOSE HAS BEEN ADOPTED by a wonderful family who will care for and love him for the rest of his…

NorthStar Pet Rescue and Eleventh Hour Rescue shared Moose’s story and photo in hopes of finding a local foster or adopter for him. The photo has taken the Internet by storm and gained thousands of reactions.

“Moose sat patiently next to his dad’s hospital bed, waiting for him to return, not knowing that “Dad” had passed away,” Eleventh Hour Rescue posted on their Facebook page. After the photo went viral on the Internet, they have received so many applications to become Moose’s future parents. Just three days later, Eleventh Hour Rescue announced that Moose officially went home with his new forever family.

Thanks to the power of social media, Moose has found his forever home. Watch the video below to learn more about what happened to Moose.

The touching photo of Moose proves that dogs have feelings and can be even more compassionate than humans. Please share this heartbreaking story with your friends and family!

Boxer Dog Was Abandoned And Tied To A Lamppost, Kept Waiting With Sad Eyes

Dog Sees Tiny Kitten Struggling To Hop Upstairs, Decides To Carry Him Up To The Top

Play Hide And Seek, Dog Gets Confused When Noticing His Owners In The Mirror