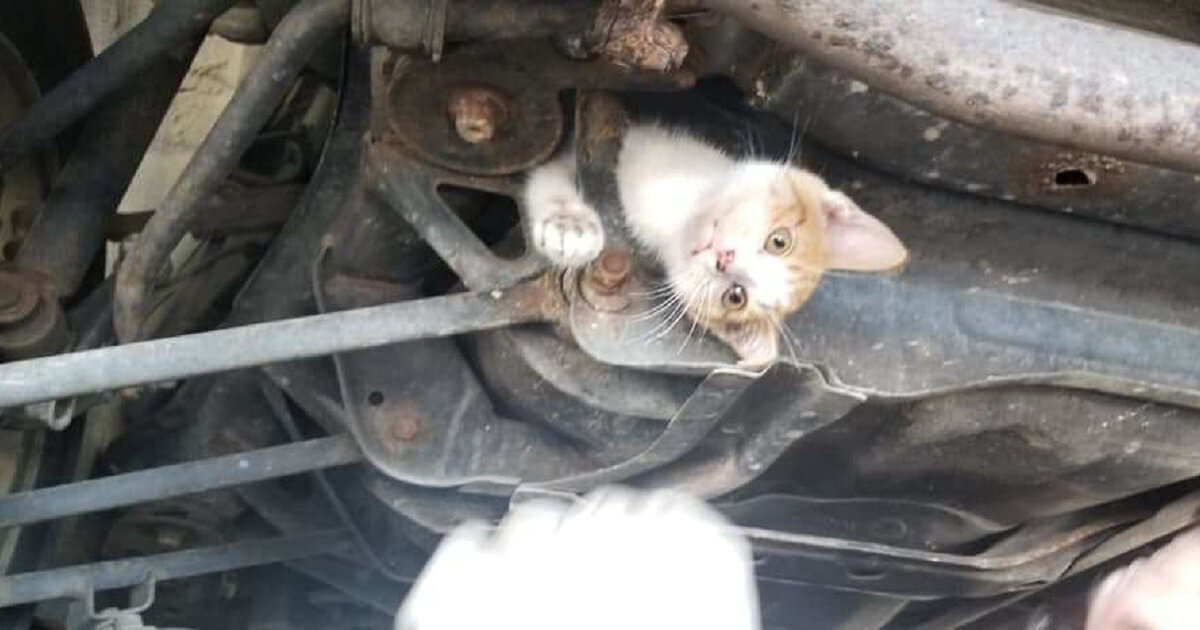 A 9-week-old kitten was found trapped under a car for several hours, and was clearly very tired and frightened. The kitten somehow got herself stuck under a man’s car who was waiting at the drive-through window at a Hardee’s restaurant in Frankfort, Kentucky.

The fast food employees noticed that there was a loud meowing sound coming through the speaker and they spotted there was a kitten stuck underneath his car, and it was clear she had no way of getting out on her own. Everyone was incredibly worried about the tiny kitten, and hoped they could rescue her from the car as quickly as possible. Luckily, some mechanics from Midas of Frankfort, a nearby auto shop, came to save the poor kitten. “She tried to crawl through a hole in the rear subframe and got lodged after realizing she couldn’t retreat backwards,” D. Scott Bourne, owner and managing director of the Midas of Frankfort, told The Dodo.

The only way to safely save the kitten was to take apart the bottom of the car. The car owner agreed, and the mechanics worked to dismantle the car and free her. They even talked to her and pet her gently to help her understand that they were there to help her.

Today was a weird day. Early this morning, the manager from Hardee’s next door came over to ask if we could help a…

“She was very docile as she was very tired and dehydrated,” Bourne said. “It was 90-plus degrees outside, and hard telling how hot it was under the vehicle.”

Finally, after an hour of rear subframe removal, they were able to get the cat out safe and sound. The car owner was so grateful to the mechanics for helping out and even offered to pay the Midas team, but they declined because all they had wanted was to help the kitten. The kitten was named Marigold, was cared for by her rescuers overnight and taken to the vet the next morning. The vet determined that she had a few scrapes but she was in great health.

Thanks to the love and determination of her rescuers, Marigold has now been adopted by kind people and is enjoying her happy life in her new house. Nobody knows exactly where she came from or how she ended up stuck under the car, but we are so happy to know that she found a loving home that she deserves. What a sweet story! Feel free to let us know your thoughts in comments and don’t forget to share this story with your friends and family!

This Street Musician Was About To Call It Quits… But Then These Kittens Showed Up And Did This.

This Tiny Feline Is The Deadliest Cat In The World

Artist Paints Zodiac Signs As Witches With Their Cats

Cat With Heterochromia And Extra Toes Was Abandoned By Her Owners, Now Finds Lots Of Love On Instagram