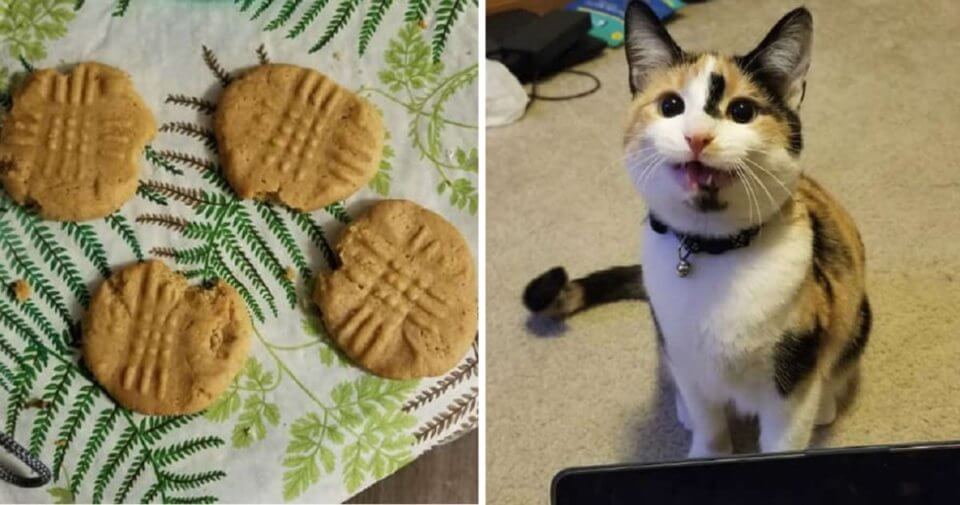 Nellie is a calico kitty who lives happily with her owners in Illinois. Ever since Nellie’s parents took her home, they’ve noticed that she is a feline foodie. Nellie loves snacks so much that she will do everything she can to get her greedy paws on a tasty treat. “She lives to eat instead of eating to live,” Allison Riebel, Nellie’s mom told The Dodo. “She loves her cat food and she loves her cat treats. We use her love of snacks to practice learning tricks. She’s become good at sit, high five and loves to play fetch.”

Recently, Riebel decided to make some cookies for her friends at the Wildlife Medical Clinic through the University of Illinois. She put all cookies in a plastic container and figured they’d be safe in there. But unfortunately, they weren’t safe at all because Nellie discovered them. Although the box was sealed, the sneaky cat still found a way to open it. Not only did Nellie bust the cookies out of the container and put it on the floor, but she also took a tiny bite of every single one.

“Nellie somehow opened the container and took all the cookies out and onto the floor,” Riebel said. “The funny thing is I know she took them all out separately because if she had just knocked them out of the container, the cookies would have broken. But they were spread out across our dining room floor with little bites out of each. So she took them all out separately and chopped them all separately and did it quietly enough to not get noticed.” Nellie did not feel guilty about this whole mess, instead looking pretty proud of herself that she found such yummy snacks. “She did not seem guilty,” Riebel said. “She plays it off very well. It’s both infuriating and hilarious. She’s very proud of herself.”

What do you think about this story? Do you have a pet naughtier than Nellie? Feel free to share pics of your pet with us in comment below!

This Cats Owner Comes Home After a Long Separation… You Won’t Believe How the Cat Reacts!

Adorable Ginger Kitten Learns How To Groom Himself