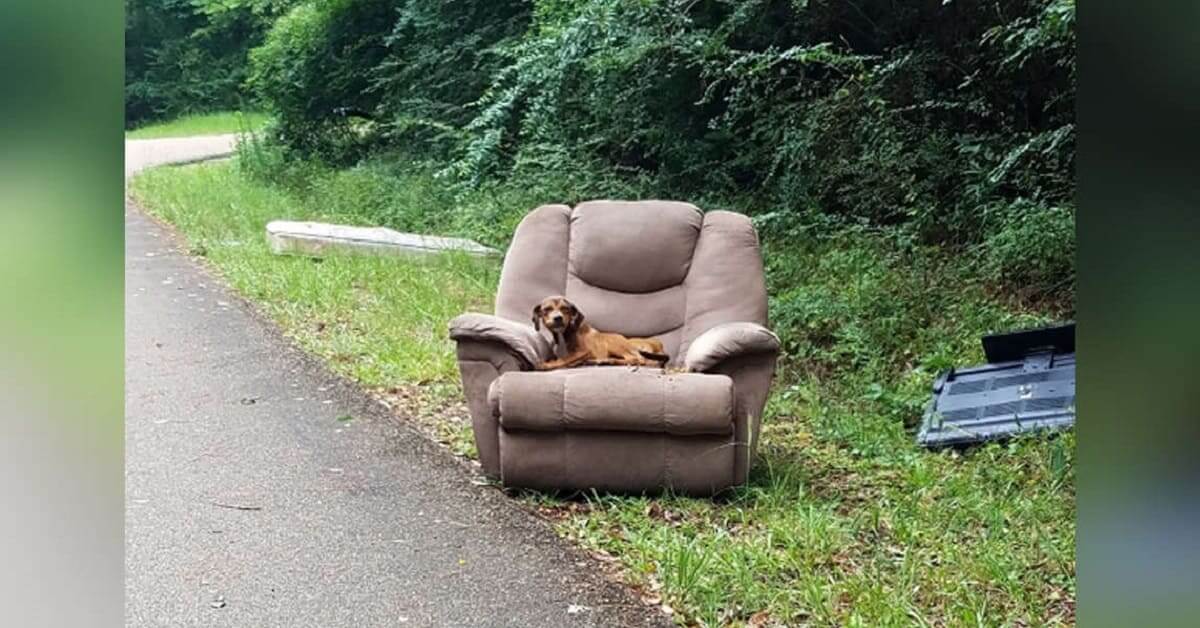 On Monday morning this week, a woman spotted a puppy with discarded furniture, including an old chair and a TV on the side of road in Lincoln County, Mississippi. The pup was dumped on his favorite chair to trick him into thinking his owner would come back for him. Sadly, the poor animal didn’t realize that he’d been discarded and his owner never returned. The woman called the local animal control officer to summon help. After that, the officer Sharon Norton quickly drove to the spot to save the small puppy. When she arrived at the scene, she tried to get the starving puppy off the chair, but the dog didn’t budge. He refused to leave the chair because he was too scared that he would miss his carers returning. He still hoped that his “parents” would surely come back to pick him. “He looks like he’s been there for about a week,” Norton told The Dodo. “He is skin and bones.”

Sharon Norton tried to approach the pup and comfort him. She gave him food and her presence immediately put him at ease. Finally, Norton coaxed the puppy to come with her. “He was very happy when I picked him up and carried him to the animal control truck,” Norton said. “I could feel his tail hitting my back, wagging. He knows he’s safe now.” “To the person that dumped this chair, your puppy was waiting for you to come back, slowly starving to death because it was afraid to leave the chair to find food,” she wrote on Facebook. “Shame on you for doing this to this puppy… but one day Karma will meet up with you.” The poor dog is now placed in the safety of the Brookhaven Animal Rescue League in Mississippi, where he has been fed and set to have a full medical examination before being ready for adoption. We hope that he can find a forever home with kind owners who will take better care of him. Please share this story to help the dog find the loving home it deserves.

Dog Sees Tiny Kitten Struggling To Hop Upstairs, Decides To Carry Him Up To The Top

Great Mom Adopts Trembling Puppies That No One Wants

People Are Sharing Their Corgi Dogs, Showing That These Guys Are Actually Cuter Than You Think