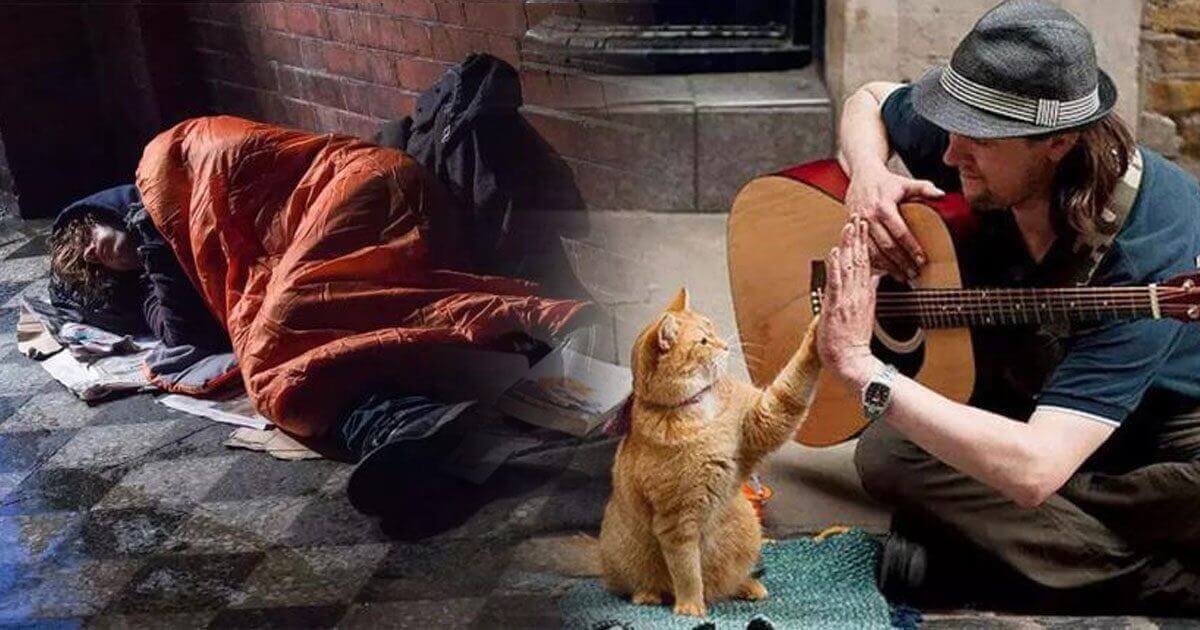 Meet James Bowen, a poor street musician and his friend, a stray cat named Bob. When James meets Bob, he never knows that his life will be changed and their friendship can draw charming fans from all over the world. In the past, James had a tough life as he had to battle with drug addiction. Sadly, his family and friends left him and he had no choice but to live on the streets. He got his food from the trash and tried to earn some money by busking on the sidewalks. Then, he met Bob – the ginger street cat suddenly appeared in his life. He found Bob in the hallway of his apartment building. Although Jame was living a hard life, he couldn’t resist helping this intelligent and sick animal. He named the cat is Bob and decided to take care of Bob himself until Bob back to health. He spent lots of money bringing Bob to the vet so he could recover. After that, he sent the cat on his way to find a better home, but Bob kept coming back to him. At that moment, Jame knew that they are inseparable. James even starved himself to make sure his friend was fed and had medicine. Bob soon accompanied James when busking in the streets of London, and they became famous. People crowded around James and Bob, asking for photos. Mary, a journalist offered to write a book about James and Bob after his Internet and media popularity, and James agrees. James’ book ”A Street Cat Named Bob” is an international sensation when becomes one of the bestseller books in England for 52 consecutive weeks and selling in 26 countries around the world. In 2016, the director Roger Spottiswoode directed a film based on the book A Street Cat Named Bob by James Bowen. The film stars Luke Treadaway, Ruta Gedmintas, Joanne Froggatt, Anthony Head, and Bob the Cat as himself. The film premiered in London on 3 November 2016 and won the Best Film award in the UK National Film Awards in 2017. 30 Photos Of Animals That Show What Motherhood Really Looks Like

40-Ton Humpback Whale Spotted Breaching Completely Out Of The Water Off The Coast Of Mbotyi, Indian Ocean

Newquay Zoo Is So Excited To Announce Its Newest Addition, A Newborn White-Throated Capuchin

Large Niltava, An Eye-Searing Bird With Brilliant Blue Head And Purplish-Blue Underneath