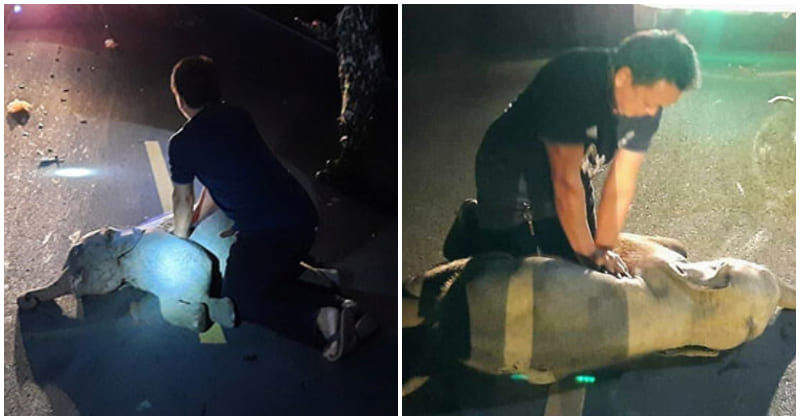 Kindness knows no bound. Not only do we, humans seek help when we need it but animals also look for it. If kindness comes at the right time, it can save the lives of these fragile creatures. This baby elephant revives after receiving CPR from an off-duty rescue worker. The young calf was struck by a motorcycle while crossing a road in the southeastern province of Chanthaburi. It looked also dead on the ground, along with a dazed and injured motorcycle rider a few meters away.

26-year-old Thai rescuer worker, Mana Srivate was called into action while he was off duty on a road trip. Mana gave the baby elephant CPR while his colleagues were treating the motorcycle rider.

Thankfully, the young and dedicated man’s rescue attempts worked. The calf revived and rested for a while before reuniting with its mom.

“It’s my instinct to save lives, but I was worried the whole time because I can hear the mother and other elephants calling for the baby,” Mana told Reuters. Mana has never rescued a baby elephant in his career life. However, he knew exactly what to do when looking at the animal. He thought CPR was the only way keep it alive. The baby elephant survived. Everything was worth it.

“I assumed where an elephant heart would be located based on human theory and a video clip I saw online,” the man told Reuters. Regarding the baby elephant, he could stand up after 10 minutes. The rescue team took it to another place for check and treatment. When the poor animal was strong again, it was brought back to the scene to find its herd. Luckily, the mother elephant heard her baby’s call, so she returned and handed her baby.

Mana’s attempts were captured by some local people. The video went viral in an instant when it was shared on the Internet. People called him a hero and gave compliments to the young man. You can watch the heart-warming video below!

20+ Cute Animals Who Melted Our Hearts With Their Beautiful Imperfections

10+ Pets Who Are Not Able To Hold Their Emotions Back