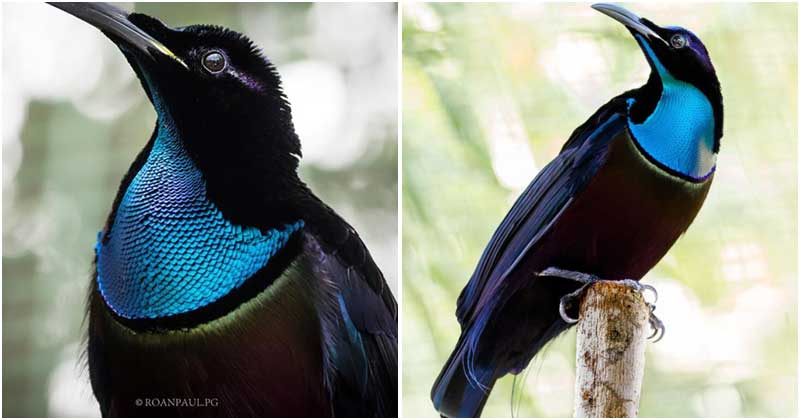 The Magnificent riflebird is such an extraordinary bird! This species has velvet black plumage that makes it stand out from the crowd. More noticeably, its iridescent blue-green crown and triangle-shaped breast shield turn this bird into kings in its colony. It’s true that this riflebird is the most flamboyant member of the Paradisaeidae family.

Take a closer look at these photos, you can see its blue tail, a yellow mouth, and curved and jet black bill. There is a clear difference between male and female magnificent riflebirds. The females wear a brownish coat with dark spots and buff bars below, finished off with a white brow. Young birds also look much like female birds. This tiny, striking bird (34 cm long) distributes in lowland rainforests of New Guinea, and in Northeastern Australia, in the Cape York area. The diets of this bird are fruits and arthropods. During the breeding season, male riflebirds perform a spectacular mating dance on a ‘dancing perch.’ He hops around, extends his wings, raising his tail, swinging his head from side to side, showing off his metallic blue-green breast shield.

They do this display in public so that all female birds can enjoy. If they are impressed by the male’s dance, they will stand in front of the male birds. After finding their mates, female riflebirds build their nest and lay eggs in. The females then incubate their eggs and feed the chicks until they are fully-fledged.

Watch the video of this spectacular bird below!

20 Photos Of Animals That Sleep Adorably And Peacefully

10+ Animal Moms That Conquered Us With Their Tenderness

10+ Photos Showing That Animals Are Always There To Support Us

20 People Who Didn’t Want To Own Pets, But Can’t Live Without Them Now