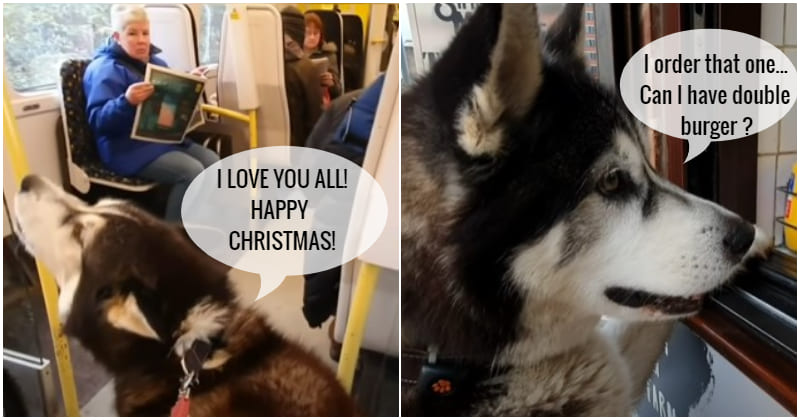 Have you ever seen a talkative dog? Yes, a talkative dog! Compared to cats, dogs are more friendly, obedient and it is likely that they follow what we say. However, some dogs prefer acting in their own ways and following their own logic. Sherpa is one of the dogs that we are talking about! The Husky is clever, friendly, and sometimes too energetic! Normally, barking is a way of communicating for dogs, but barking too much or too often is one of the most common problems owners have with their dogs. As Sherpa barks at everything and everyone he meets, he embarrasses his dad sometimes. On Youtube, the owner posted a video of his ‘talkative’ Sherpa, which he didn’t expect to become viral very soon.

The video captured a normal day of Sherpas and his dad, beginning with the scene in the subway. Sherpa raised his voice, talking to the passengers who were doing their own business. It was not until the owner stopped him that the Husky became quiet, came, and sat next to him. Sherpa loved to talk with strangers and make friends with them. Whether he was in the subway, on the road, or in the store, he was always loud, and cute!

The video, posted in December 2019, has been viewed more than 23M times and received thousands of comments on how funny it was. The most hilarious part, I think, was when the Husky entered the cafe’ with his father. While they were waiting for the drink, Sherpa noticed everyone around him and started making noise to send them friend requests. Needless to say, the owner knew nothing to do more than laughing embarrassedly, but thankfully, the guests didn’t feel like they were bothered by the noise. They found it interesting to communicate with the lovely dog. Artists Photoshop Animals Into Famous Paintings And The Results Are Awesome

20+ Animals Whose Unusual Appearance Makes Them Even More Charming