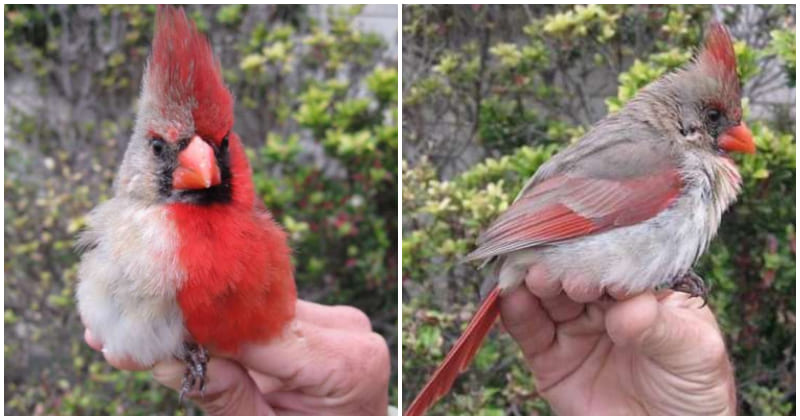 Unexpected changes in the genes of an organism could normally result in mental or physical disability. But in some cases, this could award the affected individual with some spectacular gifts.

Have a look at this stunning two-sided cardinal!

This cardinal bird has a genetic anomaly called ‘bilateral gynandromorphism’. This condition causes a bilateral asymmetry effect that makes half of the bird male and the other half female, resulting in a unique appearance.

This bird possesses a plumage cover of vermillion color on its left side and turtledove on its right. Normally, the male bird appears in bright reddish colors that vary from scarlet to reddish-orange and sometimes raspberry. The female bird looks more ordinary in a brown cover with some red accents.

Although the condition occurs in many species, not all of them can display obvious distinctions between the two genders that are easy to spot. Gynandromorphism is thought to result from the uneven distribution of sex chromosomes in the early stage of development, typically when the organism has between 8 and 64 cells.

Gynandromorphs can sometimes have both male and female tissues and most of the time, they are sterile. However, this little bird may not suffer from that because its right side, where the ovary is located in birds, is female.

Gynandromorphism can be found in a vast number of species, and even though it’s a rare phenomenon, it’s totally not impossible to find. Most frequently, this is found in organisms that have strong sexual dimorphism such as butterflies, spiders, and of course, birds.

A Cute Trio Of Black-Spotted Horse, Pony, And Dog Looks Like Siblings And Forms A Special Bond Together

20 Photos That Show Animals Have Their Own Rules And Opinions