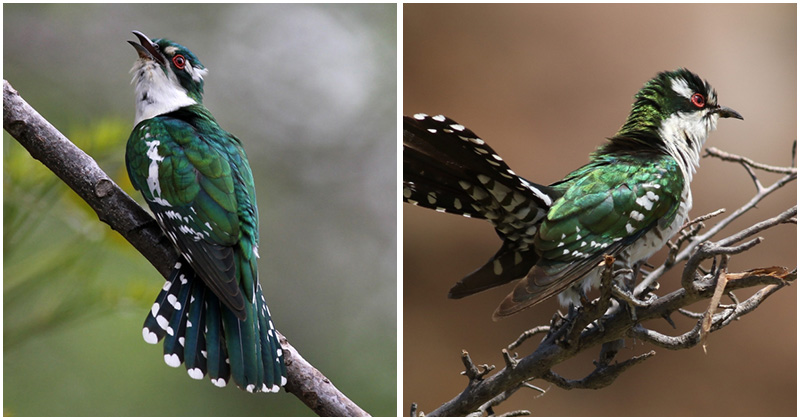 Green is the color of nature and nothing is more nature than a natural thing in green, for example green birds. The diederik cuckoo is one of those mesmerizing critters. With a gorgeous green coat and a beautiful sound, this charming species gives us a satisfying feeling of immersing ourselves in the embrace of Mother Nature and forgetting everything else.

The diederik cuckoo, formerly known as the dideric cuckoo or didric cuckoo, is listed in the Cuculiformes – a group of birds that contains two distinct families: the cuckoos (Cuculidae) and the hoatzin (Opisthocomidae).

The name “diederik” comes from Afrikaans “diedrik”, which is an onomatopoeic rendition of its sweet yet strong call. It is also known under the generic name Chrysococcyx, which means “golden cuckoo” in Ancient Greek.

Like any other dimorphic bird, the male and the female aren’t really similar to each other. The diederik cuckoo male is not surprisingly much brighter than the female with red eyes, whitish underparts and glossy green upperparts that are highlighted by random white spots and copper-sheened areas on the head, back, tail and wings.

The female looks a bit duller with more coppery shades on its body, but it’s still an alluring birdie that could easily outshine any creatures nearby.

Their juveniles often resemble the mother.

The interesting thing about this bird is a special ritual feeding behavior between the male and the female. To capture the female’s attention, a flashy coat and a cheery song are simply not enough. The male often shares a caterpillar with its mate (yes, their favorite food is small insects like caterpillars) while both of them dance together by bobbing up and down with wings partially spread.

And if the female is satisfied enough, they will officially become temporary partners.

The diederik cuckoo is a brood parasite, which means they never raise their chicks themselves. After mating, the female searches for suitable host nests around and it often lays only one egg on each nest.

On average, each female diederik cuckoo lays 3 – 5 eggs a day in different nests and 20 to 24 eggs throughout the whole breeding season. The host birds are usually weavers.

This unique bird is mostly spotted in the woodlands, savannas and riverside bushes of Sub-Saharan Africa and the southern Arabian Peninsula. Since its population is considered to be stable at this moment, the diederik cuckoo is not under any threat yet.

Blue-hooded Euphonia, A Breathtaking Glossy Blue And Orange Bird That Is Dubbed A Perfect Visual Treat

Discover A Family Of Mice Living In His Garden, Man Decides To Build Tiny Village For Them To Live In