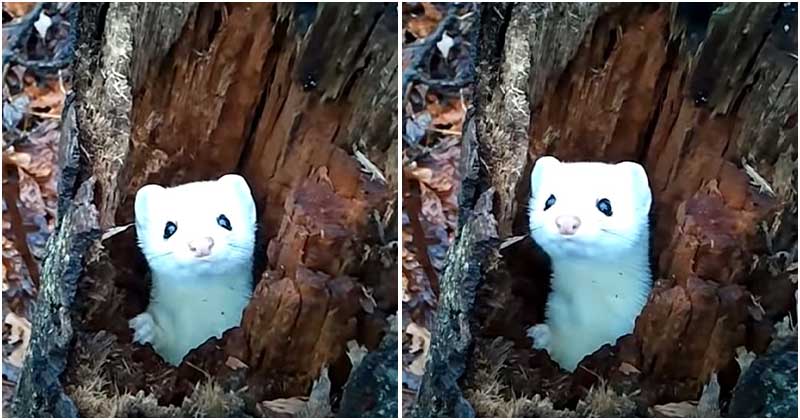 Weasel is an interesting species. Some people think that these cute animals were born with beautiful snow-white coats. But the truth is no. Their fur is brown most of the year. However, it turns snow-white during the winter period. And it comes back to the original color in spring. The white coat not only makes these creatures more beautiful but also improves their chance of survival during winter. It helps them blend into the snow, then decreases their risks of being spotted by predators. These small cute creatures also love hiding in hollow trees. A Michigan man named Chris Cooper spotted a young tiny one when he was wandering around the woods. The snow weasel seemed to be so shy to peak out of the hollow tree to say hello.

The presence of the cute furry friend is probably the sweetest surprise during Chris’s trip. Although the weasel was embarrassed, the man got an exciting experience. He approached the animal closely and filmed it on his camera.

You can watch the adorable footage below. This white tiny is so lovely, right?

The kits of this species grow so fast that they can crawl outside the nest and eat meat in the third week of their life. When these babies are about 5 weeks old, they are physically active and vocal. After that, they start accompanying their mothers in hunting trips.

Weasels have a large range. In America, you can find long-tailed weasels in the North and tropical weasels in the South. Meanwhile, Japanese weasels live in grasslands, forests, villages and suburbs across Japan. The most popular weasel, short-tailed weasels inhabit North America, Europe, and Asia, in regions as far north as the Arctic.

These animals sleep during the day and are active at night when they hunt and store food and eat. They can dig their own burrows quite quickly but sometimes take over other animals’ burrows and make them their own.

Regarding the diets, weasels hunt rats, mice, voles, and rabbits for food. But they also eat frogs, birds, and bird eggs if they are available nearby.

Major Mitchell’s Cockatoo, A Gorgeous Bird With A Crest That Looks Like A Candy Corn

Tom And Jerry In Real Life: Mouse Runs Up To A Cat For Cuddles After Being Chased Around