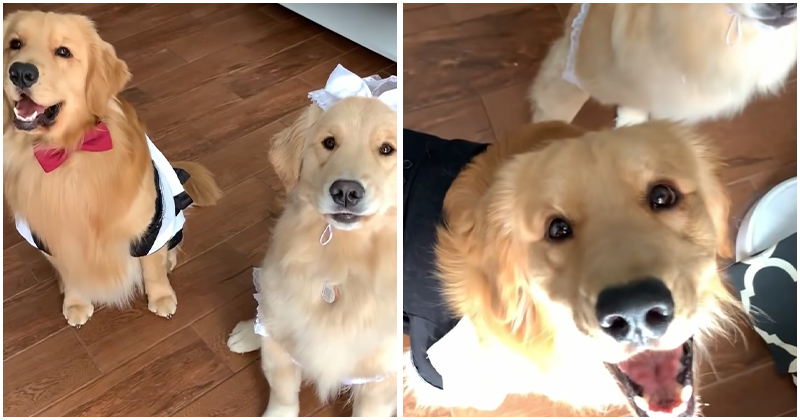 If you happen to be a fan of several famous dogs and cats on social media, you may have heard of Tucker Budzyn – a lively golden retriever who can steal our hearts in the blink of an eye! Tucker is most known for his amusing food reviews series as well as other clips capturing his enchanting reactions and expression, and he’s always friendly and endearing as any golden retriever out there.

One of the most lovable faces that often joined Tucker on his impressive reviews was his lovely girlfriend – another golden retriever named Journee. The two dogs made a perfect couple on air! While Journee was always eager to try new treats, Tucker was more like a know-it-all, calm boy who was really hard to impress.

Let’s take a peek at these funny cuties:

Even though Tucker and Journee weren’t always getting along really well in front of the camera, they just couldn’t get enough of each other behind the scenes. So for the lovely-dovey couple to officially become the life partner of one another, their owners decided to throw a surprise wedding ceremony for Tucker and Journee. Needless to say, both of them are thrilled to tie the knot!

The two dogs were dressed up truly nicely that day and Tucker just couldn’t hold back his excitement the moment he saw his girlfriend walking in in a pretty white dress. Actually, he even wanted to skip the wedding ceremony and head straight to the honeymoon. Such a mischievous boy!

Thankfully, the ceremony still went on quite smoothly except that Tucker said “I do” multiples times while Journee only remained silent (she was a bit shy maybe?).

And the best part was, when his owner said he might kiss the bride, Tucker rapidly pecked her on the cheek.

Tucker seemed to be the proudest groom ever, look how excited he was!

Check out the joyous wedding here:

And here is the very first video of Tucker and Journee as husband and wife in case you want more, enjoy!

Aren’t Tucker and Journee adorable? Please share their delightful story with your loved ones!

Man Rescues Dog From Slaughterhouse, And She Can’t Stop Hugging Him