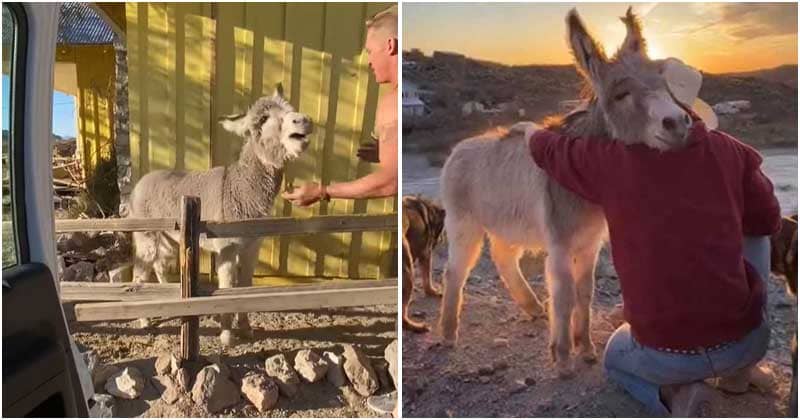 Siblings are among the most important people to us. They accompany us in all activities, from eating to sleeping. They may even spend more time with us than our parents do, having a significant impact on us. That’s why siblings often have the same manners. They teach and learn from one another quickly. It’s always great to have brothers and sisters in our life. This is not only proved in human life but can also be seen in the animal world. Walter the abandoned baby donkey in this story is an example. He is raised with three family German shepherds, so he considers himself a part of the pack and imitates some of their acts. The adorable creature wags his little tail every time he welcomes his dad home from a business trip. Walter was adopted by Kelly and Brad Blake in Oatman, Arizona when he was still a foal. His mom rejected him as she was too young. Before the baby was brought to the couple, The Bureau of Land Management and town locals had been trying for 10 hours to get Walter’s mama to take him. But they tried in vain and decided to contact Kelly and Brad for help. The couple said yes immediately. The baby donkey was adorable and friendly. He was curious about his new living environments, especially three German shepherd siblings. When the foal showed a special affection for the dogs, they came to him and gave him a warm greeting. It was an important moment as the dog gang accepted the donkey. The foal also loved his humans. When he heard Brad call him, he immediately ran to his dad and snuggled up to him. He couldn’t be happier to become a new member of the family. His sweet response kept Brad amazed and made him love the little donkey more. Walter has grown up happily with his family since then. His siblings have taught him some house manners so that he can enjoy his life as a house animal.

And of course, the cute donkey picked up quite a few habits of his brothers and sisters – from how he shows excitement to how he sleeps. He got it naturally. Specifically, he welcomes Brad home from a business trip like a dog does. The donkey comes to his dad, hopping up and down in excitement, nuzzling him, and wagging his tail happily.
These behaviors are seen as usual to dogs but turn out to be weird to a donkey. But who cares? His parents and siblings just love the way their little boy is. You can watch the lovely video below!

This adorable footage was captured by Brad. When he shared it on the Internet, it attracted millions of views, shares, and comments. People all love the way the cute donkey joins and adapts his pet life. See more adorable videos of the donkey below!

If you want to see more updates of the odd and cute pack, just follow Brad’s Facebook page here.

25 Cute Animals Who Can Steal Your Heart Within Seconds

So Cute And Fluffy, They Look Like Cheeky, Flying, Multi-Colored Pom Poms!

Pets Love Us More Than We Think, Proving In 25 Photos

60-Year-Old Elephant, Blind And Manipulated, Can Enjoy Relaxing Days Of Her Life After Rescued From Cruel Owners