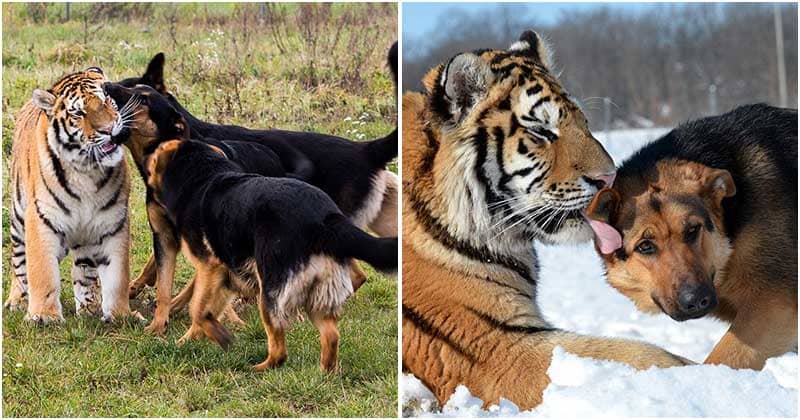 Friendship among animals has no barrier. While we, humans, sometimes hesitate to make friends, the animals don’t. They can build a special bond with animals of other species. A baby elephant becomes the best friend of an orphaned giraffe. A trio of a bear, a lion, and a tiger lives together as a family. A rescued fox considers it a member of a dog family. Amazing friendships blossom, making humans admire.

And, the oddest and cutest gang in this story is an example. Two endangered Siberian tigers and three German shepherds form a gang and become inseparable. The five break the believed animosity between cats and dogs, living happily together.

The strong bond first starts between Suria the Siberian tiger and Jenny the German shepherd. The endangered tiger was bred at the Oasis wildlife sanctuary in Senec, Slovakia some years ago. The majestic cat met the dog there and has grown up alongside her friend since then.

The odd friends love spending time playing, eating, sleeping, walking, and chasing each other but they never actually hurt their friend. They just play games and get fun with it.

When Suria was introduced to the other two dogs name Blacky and Hugo, she got along with her new friends so well. They look like siblings.

The tiger and her three doggy friends form a cheerful and energetic pack. They are all engaged in playing fighting without hurting one another.

When Sunny, Suria’s four-month-old cub comes, it’s pleasant to join the gang. They have lived in harmony and couldn’t be happier.

Their unusual yet beautiful friendship of the five animals is captured by Lucia Zustakova, a visitor and Martin Ziman, a volunteer at the sanctuary.

“It is nice to see it all and it is so amazing when you are so near these beautiful animals,” Lucia said.

Regarding the Oasis wildlife sanctuary, it was organized in 1999 and is run by Yveta Irsova, the owner of the three German shepherds. The sanctuary aims to stop the Siberian tigers from becoming extinct with her breeding program. Now, it is home to 28 tigers, 23 of which were born there.

See more photos of the pack below!

10+ Hilarious Photos Of Animals Who Are Having A Bad Day

15+ Animals Who Are Good At Expressing Their Feelings

Decked Out In A Suit Of Shimmering Neon Blues And Purples, This Jaw Droppingly Beautiful Bird Clings Onto Survival!