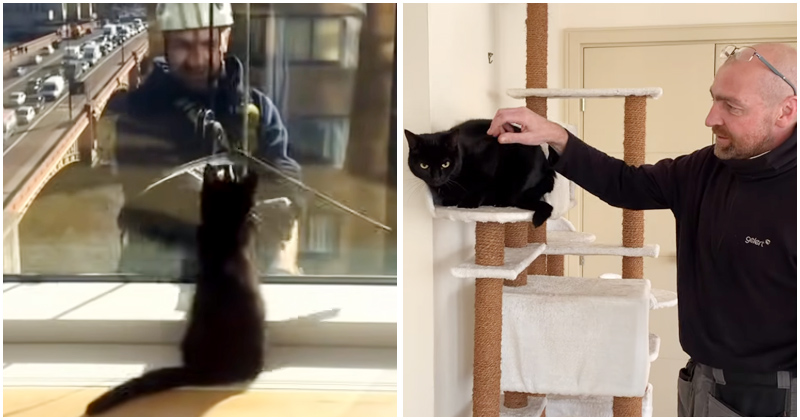 Unlike dogs, cats are not naturally friendly towards humans. But once they behave nicely around you and want to be friends with you, it means your personality has earned their trust and love.

Guinness the black kitty is a cute cat living in London with his younger brother – a tabby named Pimms and their human family. Guinness first met a window washer in 2015 when he was only 4 months old and immediately fell in love with his job – or the guy, somehow.

The humorous man also spent some time playing with the cat too, he kept moving his squeegee playfully and Guinness just couldn’t keep his eyes off that funny thing. Their delightful moment was caught on camera and has won the hearts of so many cat people around the world.

Let’s take a peek at the lighthearted scene:

Now that 6 years have passed but his passion for watching and playing with them has never changed a bit. He always gets excited whenever his cleaning friends appear and often tries to do fun stuff to cheer them up. And they obviously love to play along with him, too.

In fact, the amusing cat’s owner even creates a special playlist just for him and his window washing buddies on YouTube, and the weirdly satisfying series has made it to a total of 64 episodes so far. Many of the videos also feature Pimms the ginger cat and their human brother Nagi-kun, who always make the show a lot more chucklesome and heartwarming.

In the latest episode of the series, their mommy Rina Takei finally makes one of Guinness’s dreams come true by inviting his long-time friends in to see him face to face. Of course, they both gladly accept the invitation. Actually, at first Rina isn’t so sure whether Guinness could recognize these guys without their usual uniforms, but to her relief, Guinness is really gentle with them and even let them pet him quietly. Such an original and pure friendship!

Just look at their joyous meeting:

Please share the story of this charming cat and his buddies with your loved ones!

Man Kept Hearing Strange Noises, So He Set Up A Hidden Camera…It’s Unbelievable

10+ Cats Who Know How To Make You Smile Every Day

Photographer Takes Pictures Of Black Cats To Help Them Get Adopted

22 Photos Of Shameless Cats That Break The Mold

Meet Ah Fei, The Chubby Cat With Silly Face Will Win Your Heart