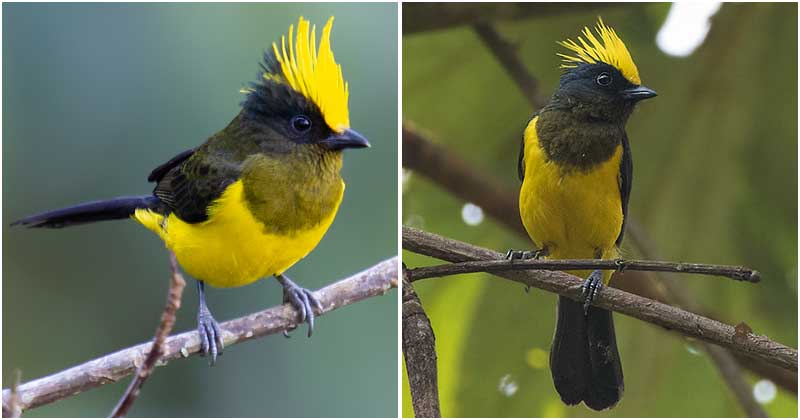 The world of birds is amazing. You can find many beautiful birds with striking plumage and distinctive features, making them unmistakable in their colony. If you get a chance to see these creatures in real life, make sure you grasp it. It will be love at first sight and you can’t keep your eyes off their charismatic look. The Sultan tit in this story is among these outstanding birds. It makes a name for itself with a bright yellow mohawk, glossy black-green plumage, and yellow belly. The gorgeous yellow shade makes this species conspicuous right in the dark and dense forests. Comparing with gorgeous male birds, the female Sultan tit is a bit duller. Her upper plumage and sides are dark green-brown. She also has a glossy dark olive-green chin and throat and a dull black tail. Watch the video of this bird below.

It’s interesting that they look different from other tits, both in size and coloration. This large songbird also produces squeaky, shrill calls. The Sultan tit distributes in different places, from Central Nepal through the eastern Himalayas into Myanmar, northern Thailand, and Southern China. And they are highly found on the Malay Peninsula and Haina, as well as Laos, Vietnam, and India. They prefer living in lowland forests. The social nature makes these birds get along with other bird species.

Their breeding season begins from April to July. Female Sultan tit builds her nest in the cavity of a tree. She then lays 5-7 eggs in the nest, incubates them, and feeds the chicks until fully fledged. This bird’s main diet is caterpillars. But they sometimes eat small berries. Currently, the population of the Sultan tit is quite stable. They are considered as least threatened on the IUCN Red List of Threatened Species. If you love these stunning yellow mohawk birds, just share this article with your family and friends.

20 Animals Who Do Things In Their Own Weird Way