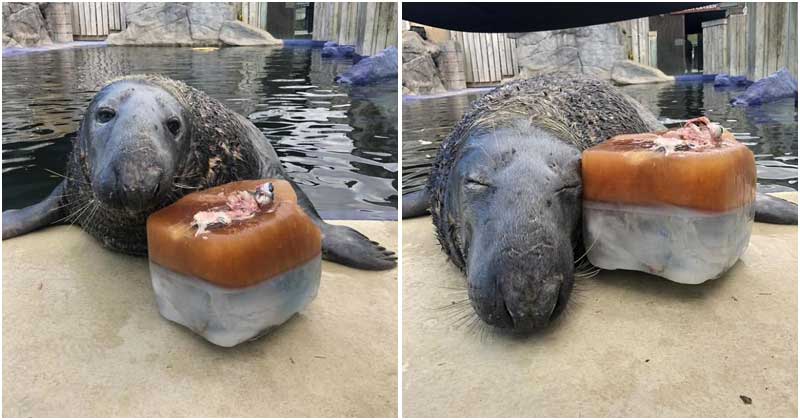 Is there anything better than celebrating your birthday with your beloved family and friends? It might be more fulfilled when you receive a surprising gift that you really love. You can’t hide your excitement when seeing it. You are the happiest person on your day. This also happens with animals, guys. They appreciate and deserve their special days as well. And, Yulelogs the rescued seal got a big surprise at his 31st birthday giant ice fish cake.

If the cream cake is an essential part of your birthday, the giant ice cake filled with fish will be the best ever treat to every seal. Just look at the facial expression of the cutie when seeing his cake. It’s so good to be true. He got a big feast on his day and just loved it. Yulelogs was rescued back in 1989 when he was a very small pup. A park spotted and rescued him. But when the park closed, Yulelogs was released back into the sea.

“However, after such a long time in captivity, he had no idea how to feed himself and had become too used to humans,” reads the official website of Cornish Seal Sanctuary. The seal started chasing people with buckets on the beach. He thought that those people came to feed him like what he used to see. And, some locals called the RSPCA for that situation.

The RSPCA rescued the seal the second time and transferred it to the Cornish Seal Sanctuary. Yulelogs weighed only around 132lbs (60kg), approximately 200lbs lesser than his standard weight. “It was apparent he needed care, so the RSPCA asked the Cornish Seal Sanctuary if they would provide a permanent home for him,” reads the website.

Now, Yulelogs is a happy, energetic, and enthusiastic seal. His 31st birthday is worth celebrating. The reason is that wild male grey seals tend to live to be around 25 years old. To celebrate the 31st birthday of Yulelogs, staff at the sanctuary decided to give him a giant ice cake filled with yummy fish. And the old friend enjoys his cake with enjoyment.

If you are looking for something positive at this uncertain time, just let this story help.

10+ Animals Who Act Just Like They Star In Movies

30 Hilarious Photos Of Dogs From The #DisapprovingDogChallenge

So Cute And Fluffy, They Look Like Cheeky, Flying, Multi-Colored Pom Poms!