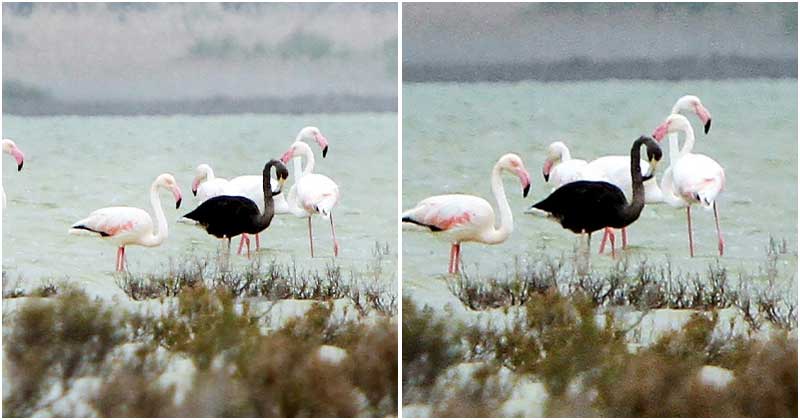 A flamingo in black? Some people may think that this kind of ultra-rare animal just appears in fairy tale books and Disney cartoon movies. But it was actually spotted, guys. An extremely rare black flamingo was captured on camera in a salt lake at the Akrotiri Environmental Centre on the southern coast of Cyprus. Unlike its pink fellows, this flamingo is in black, making it stand out from the crowd.

There is an explanation for its black plumage. The bird inherits a genetic condition called melanism. This makes its body generate more of the pigment melanin, turning it dark rather than the usual pink color. Melanism can be found in hawks and ducks, but incredibly rare in flamingo.

You can watch the video of the striking flamingo below.

As you may know, dark feathers help birds a lot in hiding in nature, away from predators. But this doesn’t happen with this melanistic flamingo. The excessive pigment causes its feathers to become brittle and breakable. There is another concern for the flamingo’s black plumage. Black feathers make it hard to attract mates during the breeding season.

The reason is understandable. Black is rare in flamingo’s colony. How do you think of this black flamingo? Share this post with your friends to let them notice this gorgeous creature!

Meet The Scarlet Minivet, A Brilliant Artwork That Comes In Red, Orange And Yellow Depending On Its Location